8 Legendary Cat Cartoons from the 90s 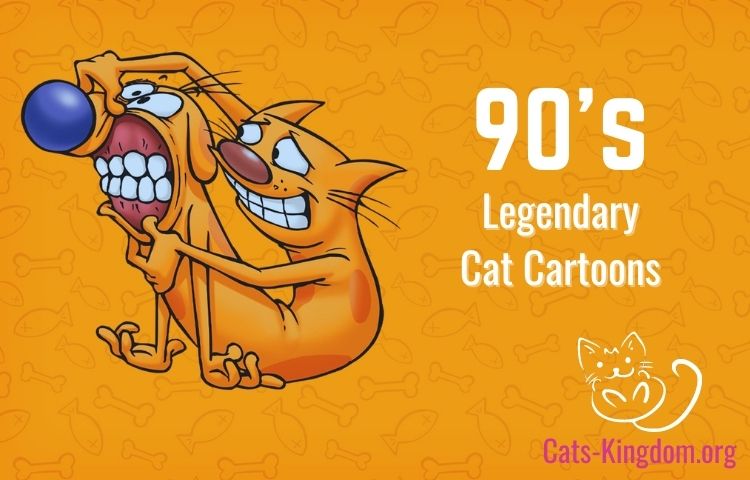 You can not deny that the 90s was the best time for cat cartoons on TV. Or maybe I am just biased because I grew up watching cat cartoons from the 90s.

I have also mentioned in many other posts that I strongly believe that my love for cats began because I adored the cat cartoon characters such as Tom, Heathcliff, Garfield, etc.

Previous to writing this post, I wrote an article about Best Cat Cartoons from the 80s, and going by the chronology, I had to write this one after that.

So, here’s the list of 8 Best Cat Cartoons from the 90s that are the highlight of my childhood and some of the best TV cartoons created to date.

SWAT Kats is one of the very few cat cartoons from the 90s that didn’t just bring a new flare to the cat cartoons created a very detailed world for its characters on par with popular TV cartoons at the time.

It became the number one syndicated animated show of 1994. But sadly during those times, there was a strict no-violence policy for kid’s shows which led to the delays and ultimately cancelation of this great show.

Worried about rampant corruption and crimes in the city, the two vigilantes decide to fight against all the evil and protect the city from danger and ultimate destruction.

Bonkers was one of the most smartly written cat cartoons from the 90s. It took a serious topic of crime investigation and beautifully merged it with comedy. This not only made the cartoon more engaging but also a lot of fun to watch.

I still remember when I was a kid that I wanted to become a police officer because of this show, which makes this show even more special to me.

The story revolves around two characters. First is Bonkers D. Bobcat, a former celebrity star who joined the police force after his career ended in showbiz. And the other is Detective Lucky Piqu, a committed servant of the law and very good at his work.

Bobcat is stupid and goofy, Piqu is serious and cold, plus he hates Bobcat. When these two are teamed together to solve crimes in Hollywood city, chaos ensues.

Space Cats is another space cat cartoon from the 90s that marked its name as one of the most legendary TV cartoons along with SWAT Kats.

Space Cats is a show that is funny and meaningful at the same time.

The show uses a weird mix of animation and puppets, to present the story which is overall enjoyable to watch.

Space Cats is mainly a team of three felines that came from a faraway planet and stationed themselves on Earth. Captain Catnut along with his two sidekicks Scratch, and Sniff follows the orders of D.O.R.C. (ruler of their planet) who gives them various tasks to perform.

They work from a super-secret base; “a base so secret, even they don’t know where they are”.

CatDog is one of the few cat cartoons from the 90s that I found at a very later stage of my life. One day I randomly decided to watch it and ended up binge-watching the whole show, even though I am not a kid anymore.

I guess this is enough to explain how much of a good show it is and definitely worth watching.

The story revolves around two brothers who are also each other’s best friends. But the problem is that they are of different species (cat and dog) and even more, they are conjoined by birth.

The cat is the cool and patient type and the dog is excited and inquisitive which results in both ending up in situations that one likes but the other doesn’t.

Eek! The Cat is a show created by Savage Steve Holland from his experiences as a cat parent. Maybe other cat parents might relate to this cat cartoon from the 90s.

It is simply made to make its viewers laugh which it manages to do quite nicely. The show is about a cat who gets in trouble for his kind nature and much of the humor derives from his plight.

Eek is a very humble purple cat who lives by the motto “it never hurts to help”. But his kindness often gets him a lot of trouble and in very awkward situations.

He lives with his human family and has a girlfriend. His biggest rival is Sharky, the dog who is always trying to make Eek’s life difficult.

3. Oggy and the Cockroaches

I started watching Oggy and the Cockroaches on a boring evening and it was the best decision I made. It was the best pass time and was thoroughly enjoyable.

Oggy and the Cockroaches is a French TV cartoon that gained popularity worldwide. It has a spin-off series called Oggy Oggy that is streaming on Netflix.

Oggy is a blue anthropomorphic cat who is kind and likes to live a simple and easy life. But there is nothing simple and peaceful in his life because of three roaches: Joey, Marky, and Dee Dee.

They continuously try to make Oggy’s life miserable in any way possible. Each day in Oggy’s house is a struggle between him and the roaches and sometimes their fight other people get involved.

Though this list is made for the American cat cartoons from the 90s, I wanted to add this legendary cat anime to this list that came out in 1994.

The reason is that this show got a lot of fame in the US and worldwide. It is an adventure, comedy series suitable for both kids and adults to watch.

If you like cats and Japanese anime, you can check out my other post on Best Anime Cat boys by clicking on this link.

The show follows the adventures of Montana Jones, a curious and brave humanoid cat who is a treasure hunter.

He and his cousin Alfred Jones travel all around the world to find ancient treasures.

Along the adventurous journey, the two brothers make some new friends and some very powerful enemies.

Though nothing comes close to the OG ‘Tom and Jerry Show, the kid version is my second favorite. It is definitely the cutest cat cartoon from the 90s.

The show follows the life of a kitten named Tom and a cute little mouse called Jerry. Tom tries hard to get Jerry out of the house but is always outsmarted by the clever little mouse and himself ends up in trouble.

But no matter how much these cute little kids fight, they always stand by each other in bad times.