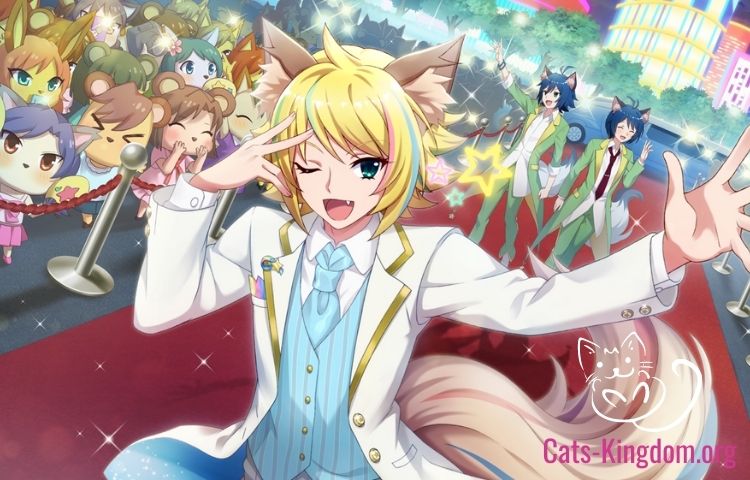 You can call it unfair but the number of cat boy animes is significantly less than cat girl animes. But you’ll find quality in all of the cat boys mentioned in this list.

In this post, I’ve compiled a list of 15 Anime Cat Boys that can steal your heart with their cute charm and appearance. So let’s just straight dive into the list.

Unlike any other anime cat boy on this list, Nyanta is very different from the rest in his appearance. He is a literal cat with a body of a human male.

He is tall and slender and likes to wear neat and clean clothes. He also pays attention to his appearance and grooming and prefers to be in good shape at all times.

Nyanta is patient, responsible, and the very definition of a “cool cat,”. He doesn’t get overwhelmed by any situation at all and keeps his composure at all times.

He likes to conduct himself as a gentleman and is polite to all. He is also a skilled fighter and uses his power for just causes.

Schrodinger is a 90+-year-old creature that has taken the form of a young teenager. He has cat ears on his head and a constant smirk on his face.

He wears his organization uniform that is black shorts, a yellow dress shirt, black knee-high socks, and a black-tie.

Schrodinger is a sinister anime cat boy who acts comical and lighthearted. He appears cheerful even in cruel and situations.

He has sadistic tendencies and lacks empathy. He can be cruel and will do anything to please his master.

Norio is a young teenage boy but his appearance is more on the girly side. He is short in stature and is also quite lightweight.

He has big brown and brunette hair. His face is also very expressive. He can transform into a brown cat with a white belly and jaw.

Norio is a very reserved anime cat boy and gets frightened easily in any serious or unexpected situations. Despite his timid nature he also gets easily angry if someone does wrong with him.

He is close to his friends and is willing to do anything for them. He also gets embarrassed easily and filled with self-doubt.

The original appearance of Cheshire is that of a black cat with golden yellow eyes.

In his human form, Cheshire has shaggy long black hair that reaches to his shoulders and covers his eyes. He has cat ears and large black clawed hands

Cheshire is a cold-hearted, aggressive anime cat boy who hates everything and everybody. He envied humanity when he was a cat so he desired a human body to live like them.

He doesn’t care for anyone else except his owner and master and will do anything to make him happy.

Loke is the celestial spirit of Lion. In his human form, he appears as a young man with average height and orange hair which forms the shape of cat ears. In his celestial form, his hair gets bigger and spikier.

In his human form, he wears casual clothes with a green jacket and his spirit form is seen wearing a black suit.

Loke is a flirt when it comes to women and likes the company of attractive females. He cares for his friends very much and will do anything to keep them out of harm.

He is also very loyal to his master and follows their commands without any question asked.

Felix is another cat boy that can make anyone confused about his sexuality by looking at his appearance. His girly looks and mannerisms make him a perfect trap character.

He has flax-colored hair and sparkling yellow eyes. He wears feminine clothes and also has a cat-like tail and ears.

Felix not only likes to appear and act feminine, but he also loves to be referred to in feminine pronouns.

He is loyal to his master who rescued him when he was abandoned by his family. Despite having a dark past, Felix is very cheerful and kind.

Gaul is a young 13-year-old white-haired boy who inhabits the power of the big cat, a lion.

His small cat ear and golden eyes make him a very cute anime cat boy. Being a prince, he wears formal royal clothes that are mainly blue.

Gaul despite being young is a very dominant and assertive blazing warrior prince of Galette Albeit. He is virtuous and is adored by everyone around him.

He speaks in a very energetic young voice that attracts the eyeball of everyone wherever he goes.

Ritsuka is a young boy with dark-purple hair and brown eyes. He has a slim body with cat-like ears on the top.

He is very attractive and has a charismatic appearance that attracts people.

Aoyagi was a really kind and compassionate person with lots of friends. But after he lost his memories, he became the total opposite of his previous self. He became cold and distant.

He likes to take photographs to capture memories. He is a pacifist and avoids violence under any circumstance.

Rokumon is the cutest anime cat boy on this list. Rokumon is a black cat who has a face of a boy. In his full demon form his face changes to that of a vicious beast cat.

Plus he can transform himself into an adorable little kitten to gain food from people who adore cats.

Rokumon is loyal to his master Rinne. He can do anything to help him but sometimes he goofs up and follows some extreme paths to help Rinne.

Airay is a cute anime cat boy with dark pink hair, ears, and tail. His eyes are yellow and have tattoos under them. His dress is quite funky and wears a gold chain on his collar.

He also has much piercing done on his body and has tattoos all over.

Boris openly accepts and flaunts his cat-like features and traits. He doesn’t get too affectionate with anyone easily and ignores people he doesn’t like.

He is a curious person and loves solving riddles. He is also self-absorbed and doesn’t like to be accused of anything.

Ikuto is a tall handsome boy with blue eyes and hair. He wears a choker with a silver cross and mostly wears a black school uniform.

In her cat form, Ikuto grows cat ears and a tail. He also receives powers like that of a cat.

Ikuto is mysterious, distant, and a little naughty anime cat boy. His traits match that of a cat. He may look detached most of the time but he is sweet and caring from inside.

Ikuto is very protective of his dear ones and also likes to tease them the most. He likes to keep people that he loves away from his troubles.

Hans is a young man with a modest appearance. He has messy hair that covers his eyes. He looks and behaves like a cat. His smile, movements are all similar to a cat. He also has a tail.

He is actually quite masculine, despite how skinny he looks under his clothes.

Hans is an anime cat boy in the true sense. He acts, talks, walks, think, fight like a cat. He is also quite dark humor. Hans can also be flirtatious at times.

He is quite smart when it comes to fighting. He also uses his smartness to deceive and bend people to his will.

Kyo is a handsome, tall teenager. He has bright orange hair with long bangs that reaches his orange eyes. His eyes are quite sharp and will occasionally become slit-like.

When a person from the opposite sex hug him or his emotions are heightened, he turns into an orange cat.

Kyo is a very short-tempered person. Though in other people’s eyes he is charismatic and straightforward. He is very reserved and hides his pain from everybody.

He is very self-conscious and deems himself unworthy. Kyo is very sensitive and vulnerable and is very caring towards people he loves. Also, his natural traits and habits match with the behavior of a normal cat.

Kuro in his human form has long blue hair that also reaches up to his eyes from the front. He has a red color with dark bags under them. His expression is mostly of boredom.

He is a vampire and thus has pointy teeth. When this anime cat boy is exposed to sunlight, he transforms into a literal black cat.

Kuro is a Servamp of Sloth and spends most of his time sleeping and being lazy. He hates to be in the decision-making position as he doesn’t like to disappoint anyone.

Being a vampire he rarely drinks human blood and hates sudden temperature changes.

Despite being chill most of the time, he hates when someone recalls his dark past and gets aggressive. He also hates vampires.

Shu☆Zo is an anime cat boy with an extravagant appearance. He has short yellow curly hair. He has a pale tan muzzle, paws, tail, and inner ear.

His nose is brown and has cyan eyes with feminine lashes. Shu☆Zo wears blue and white clothes and wears headphones around his neck.

Shu☆Zo is a character from a cat boy anime that is filled with beautiful Neko boys. But Shu☆Zo’s personality shines the brightest.

He is the leader of a famous musical band and is very popular. He is very ambitious and hard-working. He is also a caring and fun-loving person.