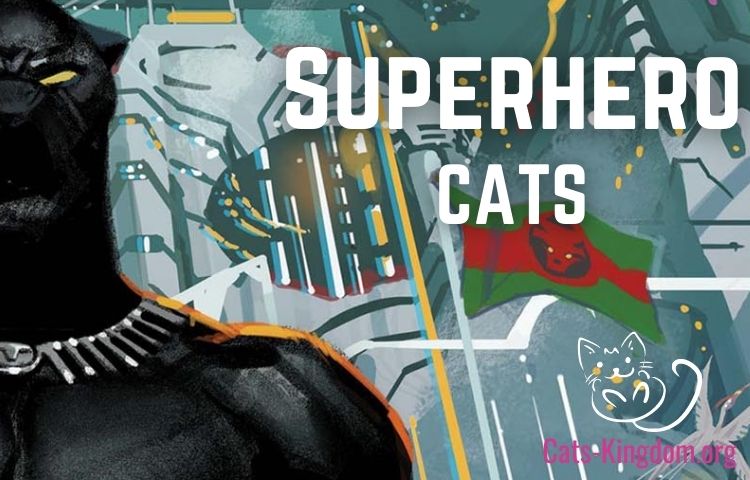 I was reading a superhero comic and my focus turned to my goofball cat and I instantly got an idea to write this post. Initially, I thought of creating a post on superhero cats cartoons.

But as I began working, I decided to change it to the biggest superhero cats from the cartoon and comic world.

I have been a huge fan of superhero stuff since childhood and had a blast writing this post. This list includes superhero cats cartoons, comic cats with superpowers, and of course superhumans with cat power and disguises.

So without further ado, here’s the list of 15 Greatest Superhero Cats characters of all time.

Ocelotina is the strangest superhero cat on this list. She is an ordinary human being who got inspired by a superheroine named Empowered and decided to become a superhero too.

Her motives for becoming a superhero are very selfish. Ocelotina doesn’t want to save the world or anything, she just wants to be rich and famous.

She doesn’t shy away from doing any kind of trickery to achieve her goals and she is not so moral either.

Ocelotina has no actual super-powers. She wears a cat-themed costume that seemingly allows her to use pseudo cat abilities sharp claws and a few other stuff.

More than anything, her ability to seduce and trick others is her actual power which she uses to her fullest.

Hairball is one of the bravest superhero cats on the list from the Marvel comics. He was an ordinary cat named Neils.

One day he and his master came in contact with unknown energy from another dimension.

Their bodies went through changes and the two ended up with superpowers.

Niels aka Hairball can create a kinetic field around himself. It allows him to absorb all the kinetic energy of other objects that are directed at him.

When Niels is inside his kinetic field, he can dodge even bullets and bounces harmlessly from object to object.

In his fully transformed state, he is surrounded by multi-colored bubbles.

Courageous Cat is the main character of one of the most famous superhero cats cartoons of all time. There is not much explanation about the origin of the Courageous Cat.

All we know is that he fights crime in Empire City with his sidekick Minute Mouse. He works with the city administration and has a secret base of operation.

Courageous Cat is an anthropomorphic cat loaded with several gadgets that helps him to fight. He has a multi-purpose cat gun and a ‘trick gun’ that he pulls out of his cape.

It can fire anything according to a situation like rope, water, parachute, boxing gloves, magnetic rays, etc. He also has secret gadgets hidden in his belt buckle and the star emblem on his chest.

Catboy or Connor is the main protagonist of Disney’s new superhero cats cartoon for kids.

He is the leader of PJ Masks, a superhero trio that fights against evil. He wears an all-blue cat costume that hides his face.

He is kind and smart but a bit clumsy. He rides a car called cat-car to reach from point A-B.

Catboy possesses all the natural abilities of a cat: like super hearing, jumping, and leaping.

He can run at super speeds and also creates lighting while running. He has the power to shoot furballs from his hands as projectiles.

Streaky was Supergirl’s pet cat that was given superpowers by an unusual form of kryptonite. The story goes like this, Supergirl was experimenting on a piece of green kryptonite.

Her experiment failed and she threw out the kryptonite. But her pet Streaky came in contact with it and got exposed to its radiation, thus getting superpowers. She even became a member of the Legion of Super-Pets

Streaky’s is one of the most powerful superhero cats on this list. Her abilities are similar to those of Superman and Supergirl, the only difference being that it’s not as strong as them.

Streaky can flight, has super-strength, super-vision, super-speed. Plus heat vision and human-level or better intelligence.

Lion-O is the lead character of Thundercats which is one of the best superhero cats cartoons.

He is an anthropomorphic lion from a planet called Thundera. He is the biological heir and leader of all the Thundercats living there.

At the age of 12, Lion-O was forced to leave Thundera with a group of Thundercats after the planet was attacked and destroyed by the enemies.

He finds shelter on planet Earth and vows to protect his new home from any danger.

Lion-O is a very capable fighter with great physical strength and agility. He is brave and righteous and the only thing he lacks is maturity i.e because is his tender age.

He wields a powerful weapon called is Sword of Omens which contains the Eye of Thundera, the source of the ThunderCats’ powers.

Lion-O also owns the Claw Shield which he carries on his waist and it protects him from any sort of enemy fire.

Felina Furr is an anthropomorphic cat who lived on a planet named Earth C. She was a martial arts instructor. One day a piece of a magical meteor lands in her home and strikes a wooden spoon and the spoon transforms into a wand.

It bestows Felina with incredible mystical powers. When her planet comes under attack by a malicious force, she teams up with six other people and takes the identity of Alley-Kat-Abra.

The magical wand gives Felina the power to cast very powerful magical spells. She can use the magical power to teleport, fly, telekinesis, and transformations, etc.

All these magical abilities make Ally-Kat-Abra one of the best superhero cats. Without her wand, she losses most of her powers but can still manage to use a certain amount of flight ability and some telepathy.

Due to her previous background as a martial arts instructor, she is extremely good at hand-to-hand combat and is very agile and quick.

Catman is basically a villain turned hero in Batman comics. He is said to be an acclaimed hunter of jungle cats. He got tired of hunting and became a burglar.

He was defeated several times by Catwoman and Batman. He moved to Africa, became part of the Secret Six group and identified notorious lion poachers, and defeated them.

Some of his powers and abilities include tracking and barehand boxing which he learned when he used to be a hunter. He is also skilled in, combating with blades.

He is a person with high intellect. He was also very superstitious about his catsuit and believed that this suit give him the cat’s nine lives.

Felicia Hardy aka Black cat is the sexiest superhero cat on this list. She is the daughter of a very renowned cat burglar, she followed the footsteps of her father became Black Cat.

Although her start was bad, after meeting with Spider-man, she got romantically attracted to him and decides to be a crime fighter.

Her powers and abilities include the power to cause bad luck to her enemies.

She is well trained martial artist, gymnast, and has sharp claws that can rip people apart.

Greer Nelson is a human girl who can mutate into a human-tiger called Tigra. Her hybrid tiger form was created through a mystical ritual that bound her soul to one of the Cat People.

She possesses a Cat’s Head Amulet that allows her to transform into Tigra and revert back to her human form. She is a champion for the Cat People.

Later she joined the Avengers and became an integral member of the Earth’s Mightiest Heroes.

Tigra is one of the fiercest superhero cats. Due to the mystical ritual, she acquired tremendous feline powers. She is super strong, fast, and agile.

She has great stamina and durability. She can also heal very fast, have sharp reflexes, and have impressive tracking skills because of superhuman senses.

Tigra is good at hand-to-hand combat and is also a pilot.

Thomas Fireheart is the CEO of Fireheart Enterprises, a multi-million dollar company. But he has another secret identity.

He is Puma, a genetically engineered being created by the Kisani Native American tribe for the protection of their tribe.

Puma is a half-mountain-lion being with superhuman powers. Thomas can transform into Puma at will. He is a very honorable man with high morals.

Puma is a very powerful superhero cat. He is very strong and possesses great speed. He can take on high damage and heals fast.

His senses are far superior to an average human. His fangs and claws are one of his deadly weapons.

Even in his human form, he is very smart and a master of martial arts.

Catwoman is not a usual superhero cat, she is more of an anti-hero. She was initially a cat burglar in Gotham city but her interactions with Batman brought a little change in her.

She often does the right things even though her methods are not right.

She is quick-witted, trained in martial arts, and highly athletic. She is super stealthy and can sneak in and out of a large group of people without leaving a single hint of it.

She is a master of disguises and uses her abilities to the fullest to achieve her goals.

Patricia Walker was an ordinary girl who was fascinated by superhero stuff and wished to become one. She gets an offer from a Titanian Priestess to train on Titan (Jupiter’s Moon).

She accepts the offer and goes through rigorous training and her body is artificially modified to reach superhuman capabilities. She joins the ‘Defender’ after returning from her training.

Patricia is one of the feistiest superhero cats on this list. She is a powerhouse both physically and physiologically. She is fast, agile, strong, sturdy, and smooth in her action.

Her training on Titan allows her to use minor telekinesis and she can resist mind control.

Wildcat is the OG in this list of best superhero cats. He is one of the main characters in the DC Universe.

Wildcat is the superhero identity of a man called Ted Grant. He was a professional fighter before becoming Wildcat.

He chose this identity to exact revenge on those who wrongfully framed him in a murder charge. He was cursed by a magician to have nine lives.

Ted’s professional background in fighting gave him superiority in different kinds of martial arts and boxing.

The curse placed on him causes his body to heal very fast and also slowed his aging process. Every time he dies, he gets resurrected, though there is a limit to it.

His eyesight also improved a lot and he got the ability to have a perfect vision at night too.

T’Challa aka Black panther is a Superhero cat and the guardian king of the fictional African nation, Wakanda. It is the most technologically advanced country in the world.

T’Challa is a fair and kind person who cares about his people and mankind and wants to use his power for the good.

T’Challa’s body has been enhanced with Wakanda technology since childhood and even without the power of Black Panther, he is highly physically fit.

After receiving the powers, he surpasses any normal human being in all things. He has super strength, genius-level intellect, superhuman speed, reflexes, stamina, and senses. He is an expert in hand to hand combat and martial arts.