Meet Cat: the cat from Coraline 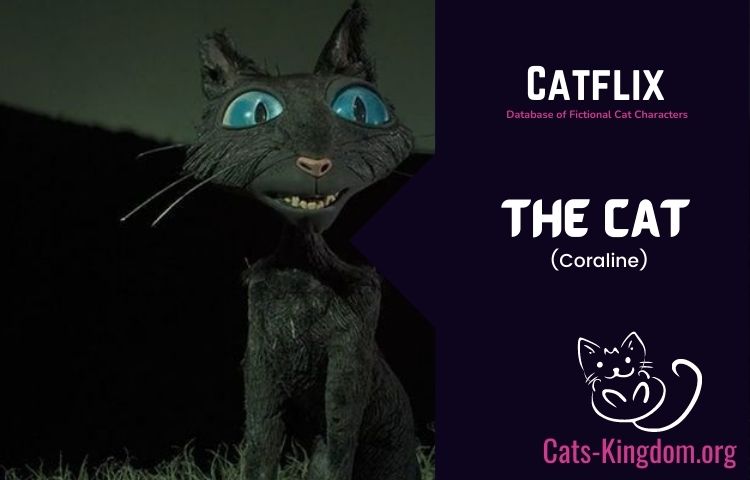 The Cat is a major supporting character in the movie Coraline. The real name of The Cat is unknown, he is addressed as Wuss Puss, Vermin, or just Cat throughout the movie.

Since it’s an animated movie, The Cat has a unique character design that resembles the Oriental Shorthair cat breed.

Even though in the movie, the Cat has a crude form with a glaring appearance, the role of The Cat is really interesting and backed with a solid storyline.

The premise of the story revolves around a young girl named Coraline. She lives with her parents and feels neglected because of their workaholic life.

She is friends with a boy who lives above her apartment and has a black cat with no name. One day she finds a door to a parallel world in her apartment and decides to crosses into it. It’s a world exactly similar to hers with the same people except that everyone in this other world is very nice to Coraline.

She meets the black cat there and is surprised to know that the cat is also from the real world and this other world, he can speak. The Cat warns Coraline to leave the otherworld because it’s not as great as it seems.

The Cat’s role in Coraline

The Cat is a vital part of the story and definitely a fascinating character. He got no name and is referred to as various names by Coraline and his friend. The Cat is a mysterious character and the truth about his origin is unknown.

He has the power to vanish and appear at will. In the real world, he acts like any ordinary cat, he plays, hunts, he understands humans but replies with gestures and meows.

Popular Read:  Ranking the Popularity of All Cat Characters in The Aristocats

But in the other world, he is shown to have the higher intellectual ability, he can also speak to others. The Cat is also quite snarly and sarcastic and his replies are often filled with witty words.

On their first meeting, the Cat despised Coraline for talking to him rudely. But over time he got attached to her. He always tries his best to protect Coraline from the dangers of the other world and warns her at every step.

Fun Facts about The Cat

The Cat: An Oriental Shorthair Cat

It is complete speculation that the cat shown in the movie Coraline is of the Oriental shorthair breed as it hasn’t been mentioned anywhere.

We came to this conclusion by examining the physical attributes of The Cat and then compared it with the real-world cat breed, we found the Oriental shorthair breed matching the most description.

It’s all for fun purposes, and it’d been more fun to compare the nature of The Cat with the characteristics of Oriental shorthair and see how much the two are similar to each other.

The Cat is one of the most fascinating cat characters ever created. It is without a doubt the star of the movie. Though the movie has a Witch and a black cat feel to it, the premise of the story is very unique and eye-catching.

In most movies and shows, black cats are often associated with bad and evil and it’s completely opposite in this one which is really great to watch. Steortyipng and demonizing a cute creature for the color of its coat is definitely not cool, so we appreciate the makers of Coraline for choosing a black cat intentionally or unintentionally.

Overall the movie is a treat to watch, not just for kids but for adults as well. And if you are a cat lover, then we strongly recommend you to watch this movie, if you haven’t already,