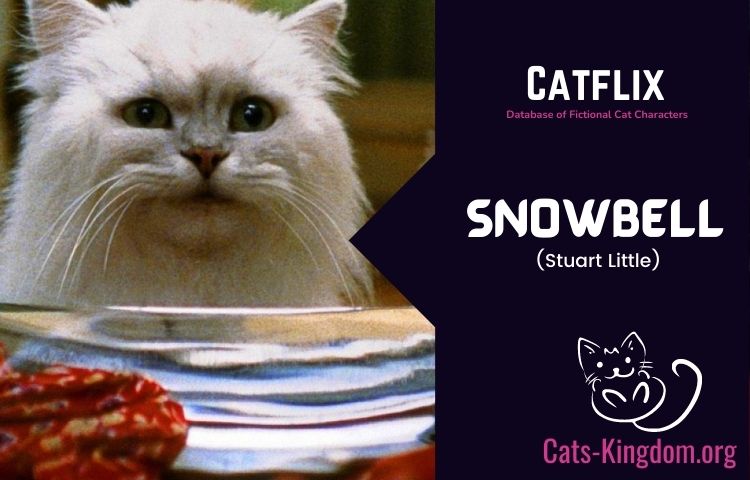 Snowbell started as an antagonistic character but went through huge character development in the latter part of the movie and further sequels.

The popularity of the movie not only made Snowbell a very memorable cat character, but it also made the Persian cat breed one of the most popular pet cat breeds in America and Europe.

In New York City, lives a sweet family called the Littles. It’s a small family including the parents, Fredrick and Eleanor, their son, George, and their elegant pet cat named Snowbell.

The Littles decide to adopt a kid from the orphanage. They come across Stuart, a highly civilized mouse, and they bring him into their family as their son.

Stuart couldn’t be happier, he was accepted and loved by all except for Snowbell. He found it beneath him to call Stuart his master. On top of that Stuart is noticed by Snowbell’s friends and all of them want to eat him.

Snowbell is the dear cat of the Little family. He has been a part of the family for his whole life, and he takes very pride in that fact. He is pompous, smart, and slightly coward.

He lived his life with ease and fun with the Little family and his cat friends until a mouse enters his life and practically becomes his master. Snowbell couldn’t accept this and plots a devious plan to kick Stuart out of the family and succeeds in doing so. But he feels guilty for his actions and decides to bring Stuart back into the family.

He shows great courage and goes against his friends to help Stuart get home safely. On that day forward, Snowbell and Stuart share a friendly bond. Even though they don’t become best buddies to look out for each other.

The makers of Stuart Little have done a phenomenal role in creating an amazing cat character, Snowbell.

We got to see the beautiful performance of the Persian cat, who is generally considered a lazy breed.

It’d be nice to see if the creators of the movie studied the nature of a Persian cat and applied it to the character of Snowbell or not.

Stuart Little is one of the best-executed cat movies ever made. Not only Snowbell but there are also many cat characters in the movie and each has its personality.

The story is simple, yet keeps you hooked and connects to you on an emotional level. There is no doubt that the star of this movie is Stuart and Snowbell and the evolution of their relationship over the course of the movie is so mesmerizing to watch.

Snowbell is an adorable Persian cat that suits the role completely. The movie is a great watch for kids and all cat lovers. And not just this movie, there are squeals made and also animated shows that are equally entertaining.