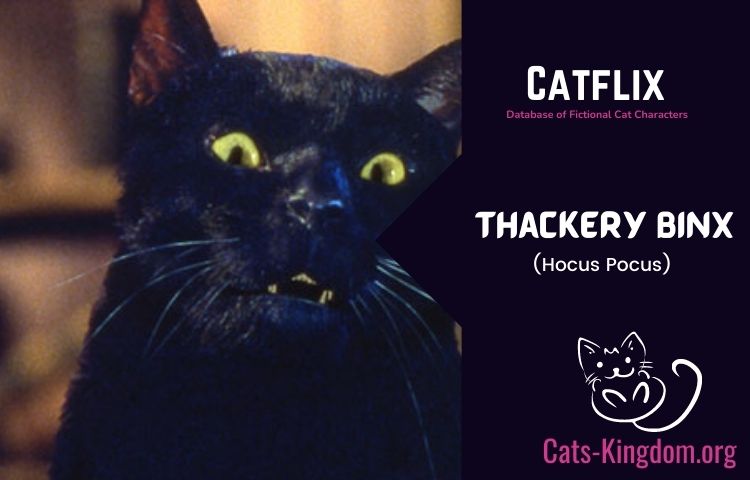 Thackery Binx is a very popular cat character from the movie Hocus Pocus which was released in 1993. It is a Halloween-themed movie and is filled with all the spooky witchcraft stuff. Though the movie is intended to be funny, it can scare small kids pretty easily.

Thackery’s role in the movie is very vital for the progression of the story. He is a talking black cat who was a human that was cured and turned into a cat.

300 years ago, a guy named Thackery Binx was cursed by the three evil witches and turned into an immortal cat. The witches were later executed by the people for wrongdoings.

Cut to the present, a teenage boy named Max accidentally revives the witches. Now his life and the life of his loved ones are under threat because the witches are trying to hunt them down to achieve immortal life.

It is up to Max, his sister, his girlfriend, and Thackery Binx, the cat, to stop the evil witches’ plans and send them where they came from, back to hell.

Thackery was a young boy before he was cursed to become an immortal cat by the evil witch sisters. He lost everything in life after being cursed; his family abandoned him because they couldn’t recognize Thackery in the body of a black cat.

Even after so many misfortunes, he didn’t give up on his kindness. He spent 300 years as a cat waiting for the curse to be lifted. Thackery is smart, brave, and caring.

He meets Max, his family, friends and gets quite attached to Max’s sister. After the revival of the three witches, Thackery shows no hesitation and fights them with all his might to protect everyone.

The theme of the movie is centered around witchcraft and Halloween, so it seems perfect that the cat Thackery Binx(human) turned into is black and very spooky looking.

Since black cats are considered the favorite pets of the witches, it was a wise choice by the creator to choose the Bombay cat breed for this role.

Though Thackery Binx is a human trapped inside a cat’s body, we still compared the personality of Binx the cat with the traits of a Bombay cat for fun, and here’s what we found:

Movie Scene: Thackery is turned into a cat by the Witches

Hocus Pocus is probably the one movie that every cat lover has seen. It is a Halloween classic that made the Bombay cat breed even more famous among the audiences.

It has to be admitted that the movie is not without its flaws but credit should be given where it’s due. The makers of the movie have done their absolute best to create seamless cat scenes that seemed genuine from start to finish barring 1 or 2 scenes in between.

The movie is hilarious and it is enjoyable to see the cat character talking. All in all, the movie is a must-watch, at least once and the character of Thackery is so iconic that it’ll stay in the minds of people for a long long time.