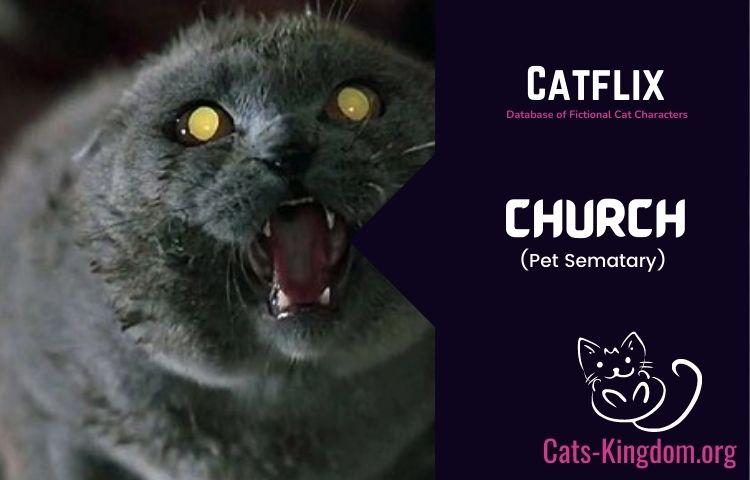 Church is the iconic British Shorthair cat that featured in the very successful horror movie called Pet Sematary. It is inspired by a script written by Stephen King.

The story explores the themes of life, death, and what lingers in between. Church’s role is capable of giving horror chills to anyone who watches the movie.

Louis Creed is a young doctor with a beautiful family. He along with his wife, daughter, and son move to a small town to start a fresh life. They also have a pet cat named Winston Church aka Church.

On one fateful day, Church meets a tragic accident and dies. Louis buries Church in his backyard, which according to local beliefs is an ancient burial ground with the mystical power of bringing the dead back to life.

Louis doesn’t believe in such stuff, so he gets shocked when he sees Church alive the next day in his garage. But Church was not exactly the same as he was before the accident, something’s changed for the worse.

Winston Church, better known as Church is the lovely pet of the Creed family. He was a lively, cute, and playful cat who was very loving towards its owners.

But after he got killed in a road accident and reanimated back to life by the mystical powers of the ancient burial ground, he changed completely. He became very violent and killed small animals mercilessly.

His relationship with his owners also deteriorated as the family started avoiding him and left him to his own devices. The resurrection changed Church completely and it made him a vicious beast from a gentle feline.

In this segment of the post, we compare the personality traits of the cat character with its breed. But since in this movie, the character of Church goes through two personality changes before and after the resurrection, it’d be fun to see when was Church’s nature most relatable to a British Shorthair:

Movie Scene: Church gets resurrected after the accident

At Cats Kingdom, we don’t like it when cats are associated with bad omens and stereotypes. But this movie takes a very unique spin on this topic and makes it very interesting to watch.

Church’s role in Pet Sematary is without a doubt the soul of the movie. The director and his team have done an outstanding job to capture highly precise shots of the British Shorthair cats that acted in the movie and everything was very smooth.

Though we wished for a little more screen time for our feline friend. All in all, it is a must-watch movie if you love cats and the horror genre in general.