Meet Toulouse: the cat from The Aristocats 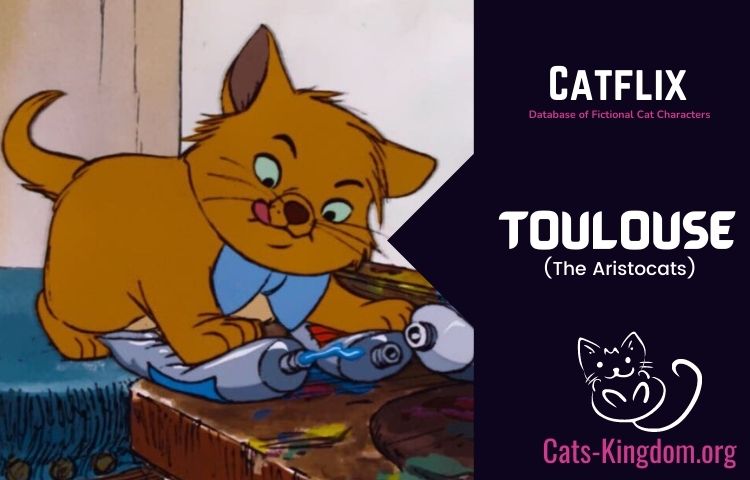 Toulouse is one of the major characters of The Aristocats. Toulouse is a little brown kitten who shines the brightest among his siblings in the movie. He is funny, sarcastic, and super fascinated by alley cats.

Toulouse is a little brown kitten who lives in a huge mansion with his mother, Duchess, brother, and sister. Their owner Madame Adelaide takes very good care of them and decides to leave her entire estate to her dear cats.

This angers the butler of the family, he drugs all the cats and throws them far away from the city. Upon realizing their situation, Toulouse and his family decide to find a way back home. They meet an alley cat named Thomas who decides to help them.

Toulouse’s role in The Aristocats

Toulouse is the oldest kid of Duchess. He is a very chill cat character but he likes to act tough. He is very captivated by the aura of alley cats, he ofter mimics them.

Toulouse is a good painter and her mother makes him practice every day. When the butler drugs Touolse and his whole family, he was the only one who got a glimpse of him and told his mother but no one believed him.

He is very protective of his family and doesn’t get scared in front of adversity.

Toulouse has a long orange coat and green eyes. He has a lighter orange stomach. He wears a straw hat and bow tie made of long blue ribbon around his neck.

He is little for a kitten, but he also appears to be a little older than his two siblings.

Every cat lover’s top 10 movies list includes The Aristocats, a renowned cat film. The film features many cat characters, but we’ll concentrate on Toulouse, the orange kitten, and the impression he left on the audience.

The adorable cartoon cat character Toulouse plays a significant role in the film. He provides the required comic relief for the film and is also infamous and adorable.

Despite being few, his conversation usually makes us smile. Additionally, bravery is the one positive lesson we can learn from his characters.

The film is a must-see for children and is also suggested for adults.

Tags:Cat CharactersCatflix
previousMeet Duchess: the cat from The Aristocats
next8 Best Blue Cartoon Cat Characters That Are Cute As Hell