8 Best Blue Cartoon Cat Characters That Are Cute As Hell 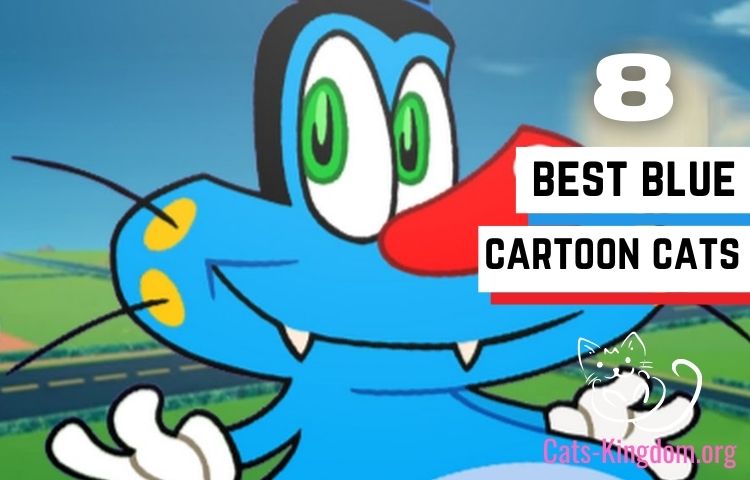 There are days when you just need to go and giggle like a little kid. Blue cartoons cats help you do that on the most random of occasions.

If you’re a 90s kid like me then these blue cat characters will make you a bit nostalgic. Blue cartoon cats are known for their lovable personalities and adorable appearance.

These kitties have a way of making us feel at ease whenever we see them. The following compilation features the best blue cartoon cats that will make you laugh instantly! From smart and funny little creatures to the ones who always seem to get into trouble.

Blanket is a blue cat who lives in a small apartment with his son Cape.

He’s lazy and loves to eat and sleep. He’s a bit of a crybaby, but he’s still the best father any cat could ask for.

Despite having a cheerful and easy-going personality, Blanket holds a dark past and he always tries to hide and ignore it. He is very protective of his son and will go to any length to keep him safe.

Chloe is a cute and cuddly cat in the film The Secret Life of Pets. She is friends with Max and other animals and helps them out when they need her.

Chloe has also been shown to be very friendly and loyal to her friends, especially Max.

This makes you want to adopt a pet just like Chloe! While Chloe is often seen being a friend to Max, she is not one-dimensional. She has her own story that you can follow if you watch the movie.

Pete the Cat is a mischievous blue cat who loves to mess around. He’s an arrogant and snobbish cat who constantly thinks he’s better than every other creature. He loves to eat, sleep and be lazy.

When his owner, a little girl, brings home a new pet, she gets him to care for the guy. Pete the Cat has been around since the sixties. He was first introduced in a children’s book and has since become a popular cartoon character.

Pete is a snobbish and lazy guy who loves to eat, sleep and mess around. He’s always ready to make people laugh with his outrageous behavior.

Let me introduce you to the most adorable cat that the world has ever seen: Happy. He is a cat from Fairy Tail, a manga series about wizards.

His character is one of the main protagonists. Happy is a small and curious animal. He is the mascot of the Fairy Tail guild. His quick movements and curiosity make him a favorite among the members.

While happy’s personality can be fickle at times, he can be counted on to lend a paw in times of need.

Gumball is the main character in the adventures of gumball. He lives in Elmore, a town where he goes to school and hangs out with his friends Darwin, Anais, and Nicole.

Gumball is often shown to be somewhat naïve, sometimes making mistakes that he must learn from. Despite this, Gumball is usually friendly and well-meaning.

Gumball has been known to be slightly more bookish than his friends, though he still enjoys a good game of soccer or an adventure. He also loves watching movies and reading comic books.

Oggy is a light-blue cat with green eyes, a red nose, a grey tummy, and white feet. Oggy’s primary activity is watching TV or cleaning the house, so he rarely gets to play.

Cockroaches, however, constantly disrupt his studies, so he has formed an affinity for them.

When he’s home alone, he begins to miss the cockroaches and the fun they bring with their pranks.

Doremon is a blue autonomous robotic cat for the future and has lots of cool gadgets. He lives with Nobita, a 10-year-old boy.

He shares all of his futuristic gadgets with him and they both have lots of cool adventures.

As time progresses and Doraemon meets other kids and adults alike, he makes new friends and the fun never stops in their life. Doremon is kind and funny as well and he aims to keep Nobita happy.

Tom is one of the most famous cat characters of all time. He is rarely heard speaking outside of a few cartoons, but he typically has trouble with Jerry Mouse, the mouse character most frequently featured in cartoons.

He constantly sets traps for Jerry, but many of them backfire and cause Jerry harm, rather than himself. In addition to Jerry, Tom also has trouble with a range of other mouse and cat characters.

He usually loses the battle in the end, but there are some stories where he outwits and defeats Jerry.