Meet Jinx: the cat from Meet the Fockers 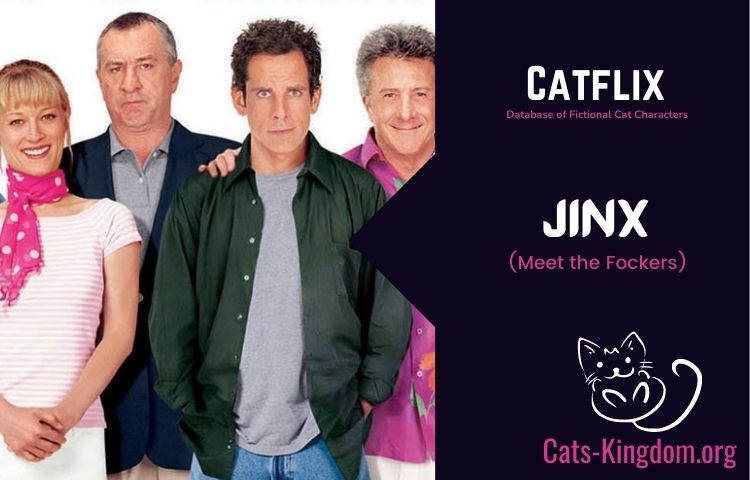 Meet the Fockers brings back the very successful Himalayan cat Jinx on the big screen for its viewers. It is a sequel to the famous comedy movie Meet the Parents. Though the screen time of Jinx is lesser in this sequel, there are some amazing moments that every cat lover will enjoy.

Two years after Greg and Pam are engaged, Pam’s parents, Jack and Dina decide to meet Greg’s parents, Bernie and Roz. But the problem is that the ideals of the parents don’t meet at all.

Where Pam’s parents are conservative, Greg’s parents are a lot liberal in their thinking. There’s not just conflict between the parents but also between their pets, Bernie and Roz have a pet dog, Moses who is always at odds with Jinx.

Will the two families be able to settle their differences and come together or the relationship between Greg and Pam end up in jeopardy again?

Jinx role in Meet the Fockers

Jinx is the dear pet of Jack who has him highly trained. In the prequel of the movie, Jack has taught him to wave, follow commands and use the toilet. In this part, however, Jinx is shown that he has now also learned how to flush.

In this movie, Jinx’s life goes through some drastic changes as he accompanies his owners to Greg’s house and there he is confronted with Moses, the pet dog of Greg’s family. Throughout the movie, Jinx and Moses are trying to get one up on each other which creates some of the most hilarious situations in the movie.

Though it is to be noted that role of Jinx is quite less in this part than the previous.

One of the main reasons that Meet the Fockers actually came to being is because of Jinx the cat. Jinx played a major role in the success of part one.

The filmmakers did a good job in keeping the character of Jinks witty and real in part two as well.

However, it is important to know how close is Jinx’s nature to the general characteristics that frequently represent this breed.

In our segment of Catflix on cats-kingdom.org, we emphasize the role of the cat character while reviewing any movie or show. Meet the Fockers is a 2004, comedy movie.

It features a Himalayan cat named Jinx in a minor capacity but that doesn’t reduce the importance of its role in any way. And what makes this movie and Jinx even more special is the attachment of viewers from part one i.e. Meet the Parents.

Even though this time around there is less appearance of Jinx, it is always joyful to watch this beautiful Himalayan cat on screen. Jinx is as much important to this movie franchise as are the characters of Greg and Jake.

Tags:Cat CharactersCat MoviesCatflix
previousMeet Jinx: the cat from Meet The Parents
next20 Animated Cat Movies For Kids and Adults to watch together