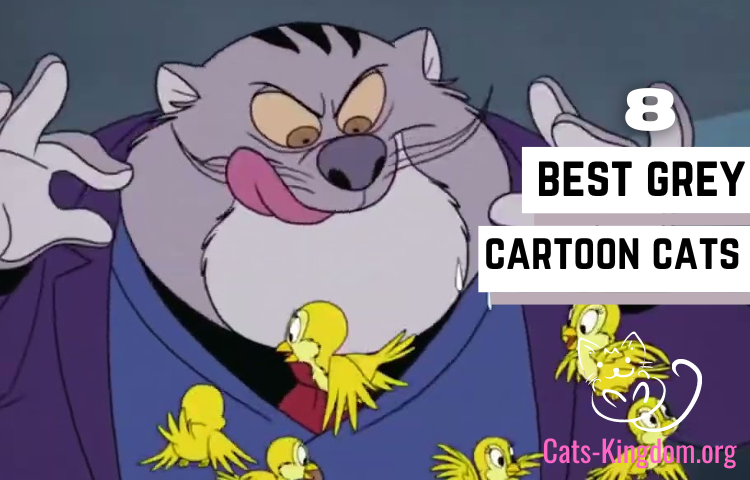 The best grey cartoon cat can be chosen from a wide range of options.

With so many cute cats available, it can be challenging to choose just one.

Check out the following list of the top 8 grey cartoon cat characters to see if you can find your new favourite.

Every single one is unique and endearing in its way. This article looks into this topic in great detail. Let’s examine this.

The same power that allows Adam to transform into He-Man to defend Eternia also allows him to transform Cringer into the formidable Battle Cat.

Although Battle Cat is a fearless and strong warrior in the combat against evil, Cringer is a slothful, gluttonous beast that frequently runs away from danger at the first indication of it.

He is a complete coward, but he is completely loyal to Adam and has even stood between Adam and harm.

The Colonel, the second in command, and Captain, the horse, are close friends of Sergeant Tibbs.

The Colonel’s most devoted rank member is undoubtedly Tibbs. Since he is a sergeant, he will always act promptly to carry out any orders from higher-ranking officers.

In saving the puppies from Cruella, Tibbs demonstrated his bravery and resourcefulness.

Mr. Kitty is Cartman’s mistreated cat. Mr. Kitty is a woman, despite what her name suggests.

She is a grey cat with pink-colored eyes, black whiskers, and dark grey ears.

Mr. Kitty frequently tries to take part in Cartman’s food, to which Cartman invariably responds by shouting, “No Mr. Kitty! That’s MY (name of food)!” multiple times, each time getting angrier.

As a result, Mr. Kitty either hisses angrily at Cartman for being greedy, tries to scratch him, flees from his owner’s insults, or simply walks off-screen without being able to eat.

Diana is a tiny white-grey cat with pink eyes, pale pink ears on the inside, and a light blue collar with a yellow bell on it.

Diana also has whiskers. She makes an appearance in Sailor Moon SuperS from the future.

She is the only guardian cat who has a collar around her neck that jingles. In addition to keeping a watch on Chibiusa, she has come to the present to gain experience.

Diana has the appearance of being little, occasionally shy, but also brave and intelligent. She is Chibiusa’s Guardian and is quite wise and logical a lot of the time.

One of the Rescue Rangers’ most regular adversaries is the felonious grey Tabby cat named Fat Cat.

When he is around other furries, he dresses sharply in a purple coat over a blue vest, a black dress shirt, and a red tie, and exhibits highly catlike characteristics when around humans.

He also has a penchant for luxury items. He is a ruthless criminal mastermind whose schemes, though occasionally quaint, are hazardous and ruthless.

Nermal is a tiny Grey Tabby cat, and Garfield is envious of him because Jon first dubbed him “The World’s Cutest Kitten.”

Even though he occasionally shows kindness, Nermal constantly and deliberately irritates Garfield and occasionally Odie, which typically leads to Garfield attempting to ship him to Abu Dhabi.

Nermal also enjoys making Garfield miserable, even though Garfield is bigger and stronger than him.

Despite Garfield mistreating Nermal, it is shown that Nermal secretly admires and considers Garfield to be his best buddy

Popular Read:  Meet Duchess: the cat from The Aristocats

Berlioz is the youngest child of the Duchess and brother of Toulouse and Marie.

Berlioz has blue eyes, dark grey fur, and a lighter stomach. Additionally, he has a small red ribbon around his neck that is fastened but occasionally unravels.

He’s not big for a kitten. Usually very reserved but cunning, Berlioz.

He enjoys playing the piano. He can be difficult to please and easily irritated; typically, he’s the first to give something he doesn’t like a snarky look or remark.

Topsy is a kitty in grey. Although in one cartoon he meets Jerry, he is one of Tom’s alley cat companions.

Topsy has a tail that resembles Tom Cat and is younger and shorter than his companions.

He is presented as a group follower who is young, naive, and frequently helpful to his buddies. Jerry was friends with Topsy in Professor Tom.

As Tom tries to teach him how to trap mice, Jerry demonstrates on the chalkboard that cats and mice should get along and be friends.

Topsy and Jerry were contentedly wandering together for a long as the episode came to a close.