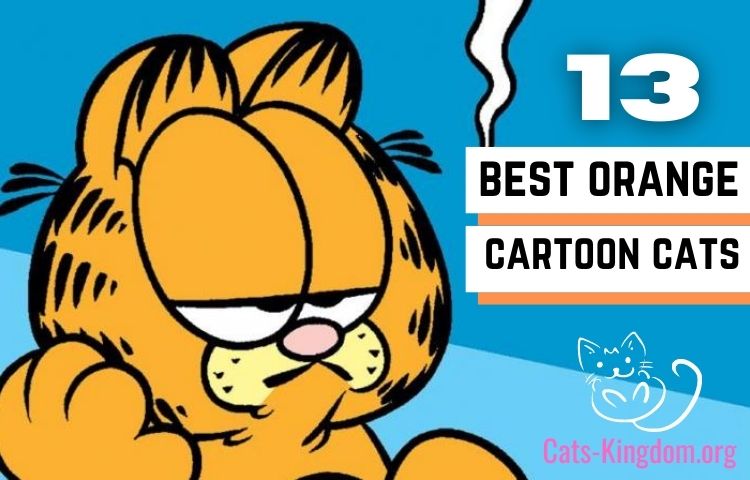 There are many alternatives when it comes to picking the ideal orange cartoon cat.

It can be difficult to settle on just one adorable cat when there are so many out there. See if you can’t identify your new favourite among these 13 of the best orange cartoon cats.

Each one is distinct and charming in its own way. This article delves deeply into this subject. Let’s just jump right in…

With his brother Dog, he has a whole body. His chest only has one spot. The smarter, more perceptive, and more devious of the two is the cat.

He often comes up with cunning schemes to deceive Dog into giving him what he wants. Due to society’s rejection of them because of their odd appearance, their lives have been difficult.

Streetwise orange house cat Heathcliff has fine black stripes. Riff Raff is the leader of the Catillac Cats, a group of street cats.

Together, they cause mischief as they prowl Westfinster’s streets. There were two parts to this television series.

Mr. Jinks is an orange cat with a blue bow tie who enjoys chasing Pixie and Dixie around the house.

I detest those meeces to pieces!” is one of his well-known rhymes.

In this short, two mice named Pixie and Dixie must contend with Mr. Jinks, a Beatnik cat who also resides in the home. And my goodness, he despises those “meeces to pieces.”

Alex is a brown and golden lion with a glossy mane that is typically fashioned like a pentagon from the back or front, with a section over his eyes spreading outward.

Like his mother, he has blue eyes as well. He is an African lion who was briefly bred in an African wildlife sanctuary before being taken by poachers.

Because he was the star of the zoo at a very young age, Alex has a demeanor that is quite reminiscent of a celebrity. In the Madagascar film, he also plays a significant role.

As a cub, Tigress resided at the Bao Gu Orphanage where Shifu helped her learn to control her strength and rage before adopting her as a student.

She trained under Shifu’s severe guidance for many years, becoming a strong fighter and acquiring a strict demeanor.

She eventually joined Mantis, Viper, Monkey, and Crane as one of the Furious Five. She first expressed the greatest skepticism in Po’s claim to be the Dragon Warrior among the Five, but she has now come around.

She is now Po’s devoted ally and buddy in battle.

Shere Khan, a formidable Bengal tiger, is regarded as stylish and endearing but is also deeply feared as the most vicious predator in the forest.

Due to his aversion to fire and weapons, Khan is also well known for his hostility toward people.

As a result, he has pledged to kill anyone who enters the jungle.

Toulouse has long orange fur, green eyes, and a lighter orange stomach. Along with a straw hat and bow tie, he also has a wide blue ribbon around his neck.

He is little for a kitten, but he also appears to be a little older than his two siblings.

Toulouse, while being the oldest of the three kittens, is the most playful and generally laid-back of the group. He practices painting every day since he wants to become a painter.

Thomas when meets Duchess for the first time appears to be a smooth-talking, street-smart cat who enjoys his life of freedom in the open with no restrictions and no obligations.

When he first sees Duchess, he immediately falls in love with her and begins to flirt and serenade her, though he was undoubtedly a little put off when he discovered that Duchess had children.

However, Thomas quickly develops a bond with Duchess’s kittens and acts as if he is their father.

Mufasa was the ruler of the Pride Lands, the father of Simba, and Sarabi’s partner. He is depicted as a just and intelligent monarch who abides by the “Circle of Life.”

His muzzle, feet, and underside are all beige, and he has amber-golden fur. His eyebrows are large and black, and his top eye patches are darker than his main fur.

Mufasa was well-known for his strength and savagery. Even the hyenas who were supposed to be his foes trembled when they heard the sound of his name.

The Pride Lands were to be ruled by Simba, the son of Mufasa and Sarabi. As is typical for young lions, he had light spots on his head and body.

Simba’s fur as a cub is described as “brownish-gold,” with lighter cream markings on his tummy, muzzle, and paws. Simba was a very daring, curious, and impressionable cub.

Simba has a larger, more muscular frame as a young adult. He greatly adored his father Mufasa and aspired to one day govern with the same power as him.

Puss is a sword-wielding orange-striped cat whose name comes from the hat and boots he is wearing.

Puss is a slick-talking cat with a Spanish accent who typically wears a cavalier’s hat, a sword-adorned belt, a tiny black cape, and tiny Corinthian boots.

He is a spoof of the well-known character Zorro. He fights with honor and pride. Similar to a ladies’ man, Puss is a “ladies’ cat.”

Tigger is without a doubt the strange character in the show. Tigger may cause a considerable amount of difficulty and mishaps for himself and his friends.

He acts carelessly and with excessive enthusiasm. Nevertheless, Tigger has a great sense of kindness and sociability.

Being the sole “tigger” in existence makes Tigger exceptionally happy. Being the “best bouncer” in the Hundred Acre Wood has given him a large ego, and he views himself as being extremely beautiful, debonair, and other qualities.

Garfield is the most popular cartoon cat on this list. He is chubby, fattening, and the cynical orange tabby/Persian cat. He is well known for his dislike of Mondays, his buddy cat Nermal, exercise, and lasagna.

Garfield loves Odie and Jon, as well as his favourite teddy bear Pooky, who is regularly seen in his arms or close to him, despite his occasionally selfishness and blatant laziness.