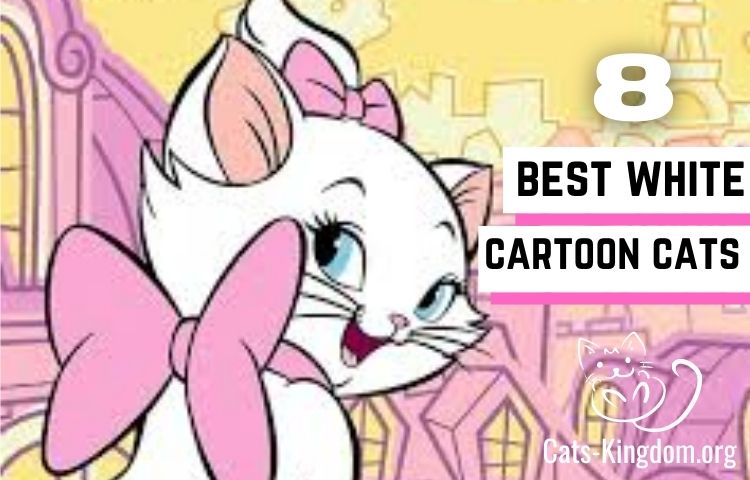 When it comes to choosing the best white cartoon cat character, you have plenty of options. With so many cute and cuddly felines out there, it can be hard to choose just one.

Let’s take a look at the 8 best white cartoon cat characters and see if you can’t find your new favorite. Each one is unique and has its own charm. This article explores this topic in detail. Let’s take a look…

Mii-chan is a beautiful white cat who is the love interest of the protagonist robo-cat Doremon. Unlike Doremon, who is a futuristic cat robot that can speak and has high intelligence,

Mii-chan is an ordinary cat who looks and behaves like one. She is kind and sweet and loves to play with Doremon.

Mii-chan is a side character in the story and gets rarely featured in the series but she is popular among the audiences and is liked very much, especially the relationship between her and Doremon.

The Cat in the Hat is a tall anthropomorphic cat who typically carries an umbrella that is either green, blue, or red and wears a red and white striped hat and a red bow tie.

As seen in Daisy-Head Mayzie, he has an orange umbrella that he uses to fly himself around the city and travel.

In all adaptations, he has a white face that either stops at the neck or goes down. His stomach on the other hand changes.

There are times The Cat himself can be a part-time magician for he is somewhat a Cat that can do magic tricks with his hat or with something else.

Popular Read:  Meet Jinx: the cat from Meet The Parents

Meowth is a little, bipedal cat-type Pokémon. Its oval-shaped face is covered in two cream whiskers on either side, and the golden jewel that resembles a coin is flanked by two hairs.

Meowth’s tail is curled as well. Due to his cunning, arrogance, avarice, and mischievous nature, Meowth blends in perfectly with his Team Rocket human teammates.

He is even more outspoken because he can communicate like a regular person.

Meowth is a master of deception; he frequently leads Ash and his pals to believe he is on their side.

In the Ice King’s, Cake the Cat is Jake’s gender-flipped counterpart. Aside from their similar shapes and proportions, she doesn’t resemble Jake at all.

She has white eyes in which the black pupils appear circular whenever surprised, thrilled, shocked, or scared.

She has cat ears, a small nose, a cat-like muzzle, white fur with lots of coffee-colored spots, and a big, bushy tail.

Snowbell is a smart, pompous, and slightly cowardly cat who has always lived with the Little family.

He is very proud of his long association with the family, and he takes great pride in that fact.

He has lived a happy life with his cat friends and reveled in it until a mouse entered his life.

Snowbell could not handle this, and he hatched a devious plot to expel Stuart from the family.

However, Snowbell felt bad for what he had done, and he decided to bring Stuart back. Although they were not pals, they grew to care for one another.

Artemis is a white tomcat with short fur and blue eyes. He is slightly lazy and lovesick, he is like a father figure to Minako.

He frequently gets into trouble with Luna, and at one point is banished from her sight for looking at a nun; although, in reality, he was looking at the church and ‘hoping to one day get married there.’

He is funny and loves to pull pranks on others. But deep inside he is really caring and protective of his loved ones.

She is one of Disney’s most iconic, lovable, and well-developed cat characters. Duchess is a white cat with three children.

She lives like a gentle and refined lady because of her wealthy master. She teaches her kids to be polite and well-mannered, and she also cares for her owner.

Duchess is very protective of her kids and her master, and she puts them before herself and her desires and happiness.

She is gentle, friendly, brave, and has a good heart. Because of her love for others, she would even sacrifice her own happiness for the good of the family.

Marie is the youngest of the three cats in The Aristocats. Marie is a small white kitten who lives his her mother and two brothers.

She and her siblings live in a big mansion and live a happy life. Marie and her brothers are some of the most loving kittens they’ve ever had, always looking out for one another.

Marie has a sweet voice and even sweeter disposition that endears her to everyone she meets.

She can be shy at first but once she warms up she’ll give you her trust and affection back with no holds barred!