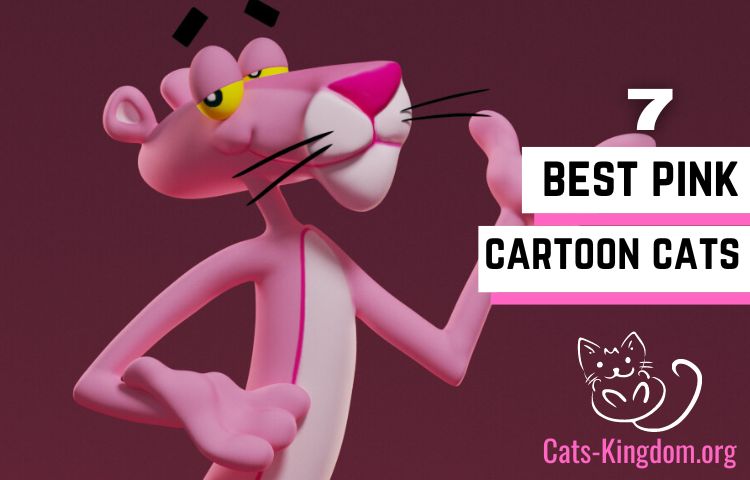 There are many possibilities when it comes to picking the greatest pink cartoon cat.

It can be difficult to settle on just one adorable cat when there are so many out there.

See if you can’t identify your new favourite among the top 7 pink cartoon cat characters in the following list.

Each one is distinct and charming in its way. This article delves deeply into this subject. Let’s look at this.

She wears a white stole around her neck, and beneath her left eye and whiskers, she has a beauty mark in the form of a star.

Mme. Rubens-Chatte is skillful, well-contoured, and a formidable opponent. She is the proprietor of Salon De Beaute Pour Felines.

Princess Carolyn is a Persian cat in female form. She has pink hair that is curled on her head and pink fur.

She has long, black whiskers and emerald eyes with bags under them. She is decked out in a knee-length teal dress with a yellow fish motif, a grey waistband, and dark pink stiletto heels.

The agent is Princess Carolyn, who is sincere, astute, and diligent. She is very good at what she does and can multitask and network sometimes almost effortlessly.

Princess Carolyn is confident that she can solve any problem through perseverance and that she “always lands on her feet.” She desires a pleasant resolution to her issues.

Popular Read:  12 Biggest Cat and Dog Movies of All Time

Chooch is a bright pink cat with a bushy tail, a cream-colored snout, and long fur.

Depending on the substance, his tail has a black or white tip. He also happens to be the alley gang cats’ tallest member.

He typically has angular eyes that resemble those of a Siamese cat and is depicted wearing a white long-sleeve turtleneck sweater.

He often exhibits sensitive and hopeless romantic tendencies, but unlike Top Cat or Fancy-Fancy, Choo-Choo is too shy to approach women.

He is prone to nervousness and insecurity and frequently has second thoughts about potential partners.

Arlene is a long-tailed, thin cat with pink fur, a small neck, and big, red lips.

She also had a large gap between her two front teeth earlier in the strip’s run, which Garfield frequently made fun of.

She enjoys making witty comments about him, probably because of his big ego.

Snagglepus has a collar, two cuffs, and a black tie. He is an anthropomorphic mountain lion in a hot pink color.

He is best known for saying “Heavens to Murgatroyd!” and other phrases like “Exit, stage left!” that is used in stage directions for plays.

Snagglepuss always works to improve the living conditions in the grotto where he resides.

But no matter what he does, he always ends up back where he began or in a worse situation.

The strange, pink-and-purple-striped Cheshire cat has a grin that never goes away.

The Cheshire Cat is Alice’s companion during her explorations of Wonderland, but he also enjoys getting into mischief and being unpredictable.

The only person in Wonderland who genuinely pays attention to Alice is the Cheshire Cat. The Cheshire Cat can vanish at will and always has a smile on his face.

He is a very strange creature who can alter the shape of his body to either amuse or terrify his guests.

He teaches Alice the “rules” of Wonderland through his comments. He enlightens her about how things function there.

The snout and fur of the Pink Panther are pink.

He has whiskers and black eyes with yellow sclerae because he enjoys playing practical jokes on the janitor whenever he is seen.

He has a high level of curiosity, as he loves discovering and trying new things.

He has demonstrated a preference for hospital care over other types, as well as a liking for eating habits and, in some cases, dieting to shed extra pounds when overweight.

He is also very cunning, relying on cunning tricks rather than using force to achieve his objectives.