15 Best Black Cartoon Cats that are Adored by People 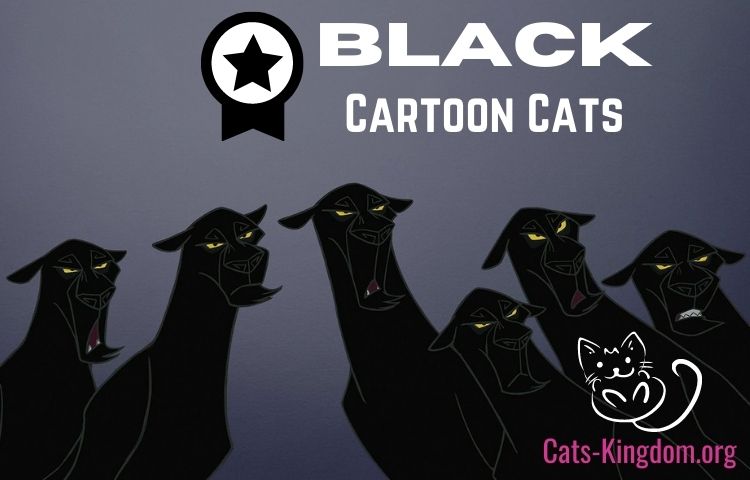 There are hundreds of cartoons with cats and among those, there are several that features cats with black fur. But very few black cat cartoon characters are enjoyable and lovable to watch.

In this post, I’ll be noting down the 15 Best Black Cartoon Cats that are adored by the public and have a big fan following of their own. Hope you like the list.

Courageous Cat is the protagonist of a famous superhero cat cartoon. He fights against crime in the Empire city along with his sidekick, Minute.

Courageous is a brave and smart cat and does not shy away from any danger and faces it head-on. He is comical and the representation of good.

Courageous Cat has most of his body covered with a red superhero suit that has a yellow star in the middle.

Only his head that is mostly black in color indicates that he is a black cartoon cat.

Sebastian is a part of the famous Scooby Do franchise. He is the pet of Alexandra Cabot who is a minor villain in the story.

Sebastian is mean and a trickster. He is not very much loyal to his owner and often laughs at Alexandra’s miseries.

Despite being a pet of a bad person, he does not root for and something even supports the enemies of Alexandra.

Sebastian has a very unique appearance among all the black cartoon cats on this list. His fur is mostly black in color, except for his paws and the tip of his tail, which are white.

Also, most of his face has white fur, only a short patch around his eyes has black hair. He has blue eyes.

Mao Mao is the lead character of his show and likes to live life as a hero. He likes adventure and will do anything and everything to help anyone in help.

He has high morals and follows the code of heroes with full commitment.

Mao Mao is one of the very few black cat cartoon characters that have complete black fur with no patches.

He has big green eyes and he is usually seen wearing a black dress with a red belt, leg protectors, and a long cape.

Mittens is one of the best cat cartoon characters. She had quite a difficult life as she was abandoned by her owners.

This caused her to become more cautious and less trusting. She has a short temper and a sarcastic personality. She is smart, sassy, and a little sadistic.

Mittens is a small black cartoon cat with dark fur. She is not completely black and has big white patch hair under her belly, on the paws, tip of the tail, and a small white spot on her nose. She has big white eyes and white eyebrows.

Scratchy is the parody character of Tom the Cat from Tom and Jerry. But unlike Tom, Scratchy always gets bullied by Itchy (parody of Jerry). Scratchy is a dim-witted cat.

He is very kind and gullible. All he has in his life are misfortunes and miseries even though he is not at all fault.

Scratchy is a stupid-looking black cartoon cat. His ears look more like horns. He has round yellow eyes and a big grey patch of fur on his belly. He also wears white gloves.

Berlioz is one of the major characters of the Disney movie The Aristocats. He is a quiet kid who is also very mischievous.

He is naive and gets irritated very quickly but has a sweetheart and loves playing the piano.

Berlioz being a kitten is very small in size. He is also the odd black cat cartoon character on this list. He has a very dark gray fur which is practically closer to the color black and hence he’s been added to this list.

Berlioz has blue eyes, a light grey stomach, and has a small red ribbon tied around his neck.

Lucifer is a cat from the famous Disney movie, Cinderella. He is a villainous cat and plays his part perfectly. He is mischievous and likes to cause trouble for others.

He is very smart and sneaky but also quite clumsy and that’s his only weakness.

Lucifer is an overweight cat with black fur covering most of his body. The belly, paws, and the tip of his tail are light grey in color.

He has a big head with a white muzzle, a large pink nose, and green and yellow eyes.

Pete is the arch-enemy of Mikey mouse and the bad guy of the story.

He is a bully and a thug who likes causing trouble for others. He does not repent for his bad deed and takes pride in his bad personality.

Pete is a big and fat anthropomorphic black cartoon cat. He is a shabby-looking character with some teeth missing and a large stomach.

He is seen wearing different kinds of outfits which mostly makes him look like a thug.

She is very close to a dog named ‘Santa Little Helper’ and possibly bears romantic feelings for him.

Snowball II is a pure black cat with greenish-yellow eyes and a pink nose. Her ears resemble that of horns.

Her canine teeth are always visible and she wears a collar around her neck which is mostly blue in color and sometimes red.

Salem Saberhagen was a witch who was cursed to become a cat. He is a witch trapped in a body of a black cat.

His notorious behavior doesn’t change even after turning into a cat. He cares for his owner but most done leave a chance of having fun at her expense.

Salem is a goofy-looking black cartoon cat. He has all-black fur and has a collar tied around his neck. His canine teeth are visible even if his mouth is closed.

Butch is the most featured cat character in the Tom and Jerry series after Tom, of course.

He is a loudmouth and very mischievous. He is street smart and a romantic at heart. He is often shown as the love rival of Tom in a few episodes.

Butch is an anthropomorphic cat with black fur except for his hand feet and nose that are grey in color. He has and yellow and black eyes. In a few seasons of Tom and Jerry,

Butch has a bandage tied to his tail. Since he is an alley cat, he often looks shabby and dirty.

Bagheera is a popular black cat cartoon character from ‘The jungle Book’.

Despite being a wild animal, he is very kind and selfless. He is also very wise and calm in every situation. He doesn’t like too much drama and likes to live in peace.

Bagheera is a big cat, a black panther to be precise. He is a sleek and slender wild animal.

His body is covered with dark black fur and has a gray muzzle with a pink nose. His eyes are yellow and he has long black whiskers.

Figaro is probably the cutest black cartoon cat on this list. But he is the complete opposite of his looks. He is very grumpy and moody.

He gets easily irritated by things he doesn’t like. He acts tough but deep down, he has a sweet, kind heart.

Figaro is a small black tuxedo cat. His body is mostly covered with black fur but a large portion of his belly is white along with his paws and tip of the tail.

His face and part of his neck are also white in color. He has big black and yellow eyes with two whiskers on each side.

Sylvester is a three-time Academy Awards-winning black cat cartoon character. He is wicked and smart but clumsy.

He always acts superior and considers every weak creature as his prey and trie to hunt them but fails every time.

Sylvester is a beautifully drawn black cartoon cat. For most of the part, his body is covered with black fur, except for his belly, paws, tail, and a small part on the face are white. He has a round red nose and sharp claws.

Felix is the legendary black cartoon cat and one of the very few cartoon characters that turned into a generational icon. He is a cool cat who is very notorious.

He is naïve and very curious and loves making puns. He is also kind-hearted and very helpful.

Felix is a black cat cartoon character that was designed way back in 1919 and since then there is hardly any change in it.

Felix is an anthropomorphic cat with back fur, a white snout, and very big eyes that take over half of his face.

Tags:Cat CartoonsCat CharactersCat Entertainment
previous30 Most Famous Cartoon Cats of All Time
next12 Biggest Cat and Dog Movies of All Time