12 Greatest Tiger Movies of All Time 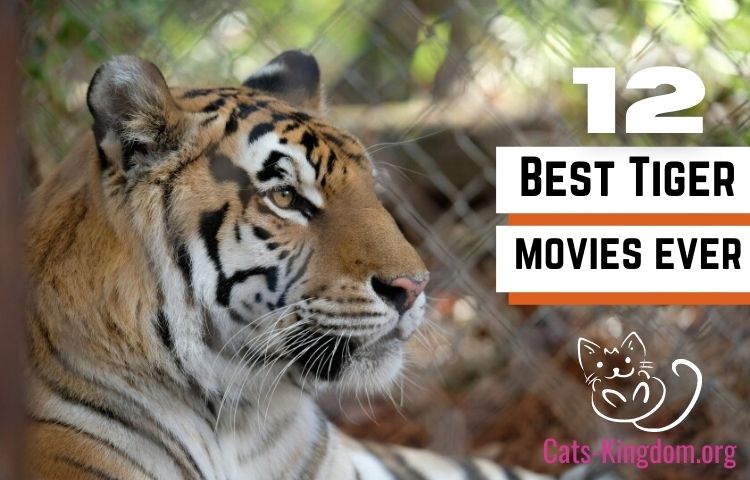 Are you a tiger lover looking for a good tiger movie to watch? If yes, then you’ve landed on the right page.

The list has got a variety of genres with tiger movies for everyone’s taste.

In this post, I have created a perfect list of 12 Best Movies About tigers that every tiger lover should watch at least once.

You might have heard many stories of a tiger attacking people. It sounds gruesome and it is even more frightening to watch.

This tiger movie is no less than a horror movie and it features some of the scariest tiger attack scenes shown on the big screen. The movie revolves around a manhunt to find and eliminate a vicious tiger who is killing people.

The movie got a mixed reaction from the public where they blamed it for having slow progression but most of them appreciated for great tiger screen. So, it is up to you to give it a try or not.

Striped Trip is a classic Russian comedy movie. The movie is picturized on a cruise ship that is carrying lions and tigers from a zoo. When these animal gets freed from their cases, mass hysteria ensues with the passengers of the ship.

But a barmaid on the ship has a special gift of interacting with animals and she uses her charms to subdue these dangerous animals and brings calm to the ship. It is a good time to watch this movie that you can watch with family and friends.

The Jungle book is not a tiger movie per se but the role of Sher Khan (tiger character) is so important in the movie that I decided to include it in this list. The movie revolves around a young boy named Mowgli who is adopted by the animals in the jungle.

But he has one foe and that is Sher Khan, a vicious tiger who hates humans and wants to eat Mowgli. It is a story of the adventures of Mowgli and his rivalry with the monstrous tiger.

The movie is a legend in itself and a must-watch for anyone who hasn’t seen this masterpiece.

A Tiger’s Tail is a movie for the whole family to enjoy together. It is a light-hearted movie with funny scenes sprinkled all over it.

A young boy’s life a 360′ turn when a small tiger cub follows him out of an animal sanctuary. Now it is up to the young boy to hide the cub from his family and find a way to send it back to a safer place.

Those who love tigers will surely enjoy this movie and will be delighted to see the cute tiger moments.

The Tiger Rising is probably the latest movie about tigers that has arrived on the big screens. Though the movie had a huge star cast, it failed to make a huge impact. Still, it has some good moments and can be watched once with the family.

The movie revolves around a 12-year-old boy named Rob who discovers a caged tiger in the wood near his house.

He is an ordinary kid who is bullied at school and unable to make a friend. But he meets a young girl and together they decide to help the tiger.

Kung Fu Panda as the name suggests is a movie centered around a Panda and his journey to becoming a Kung Fu master. But the main reason for adding this movie to the list is because of the character named ‘Tigress‘.

Tigress is one of the main supporting characters of Kung Fu Panda. She is a member of Furious Five.

As the main character, Poh struggles to become a Kung Fu Master, Tigress and other members of Furious Five help the village from danger.

Popular Read:  15 Less Known Facts About Big Cats that You should be Aware of

Burning Bright is a tiger movie that is straight out of a nightmare. The movie is made to instill fear in the mind of its viewers and thus stresses more on showing the more gruesome and vicious side of tigers. So if you’re looking for a serious tiger movie then check this one out.

The story revolves around a young girl Kelly Taylor, his brother Tom and a tiger. Kelly’s stepfather spends her entire money to buy a tiger and brings it home.

On top of that, he reinforces the entire house to protect it from the hurricane. Now Kelly finds herself trapped with the starving tiger and there are a lot of things that could go wrong.

The Tiger Walks is a tiger movie that keeps you on the edge. Even though the tiger is not shown that frequently, the story keeps you hooked to the prospect of finding the tiger.

The movie begins with a tiger escaping from the circus and hiding in the wood. Everyone was scared of the tiger and wanted to kill him. The Sheriff’s daughter wants to save the tiger.

Together they raise money to buy the tiger from the circus. But first, they need to find him before someone finds and kills him.

The Tigger Movie is a part of a very famous Winnie the Pooh franchise. The movie is about Tigger and all his bouncy adventures. It is hilarious to watch and filled with comic scenes plus some crazy action.

Tigger is looking for someone to bounce with, but all his friends are busy. So he decides to look for his family to play with. On this adventure, he comes across my funny yet awkward situations.

Though the movie is made for kids, it is done so beautifully that even adults will laugh out loud while watching it.

3. The Tiger: An Old Hunter’s Tale

The Tiger is a much appreciated Korean movie that revolves around an experienced hunter named Man Duk and a tiger referred to as Mountain Lord by the locals.

The tiger is majestic and has killed many hunters who tried to kill him. He has become a legend among the locals. Man Duk unwillingly accepts the challenge to hunt the tiger and thus an enthralling tale is created.

The movie operates in various layers of deep psychological rationals. It’s not just about man vs animal, it makes one think about the motivation behind the actions of each living being.

The movie sheds light on a very serious issue that the tigers are facing in the wild and that is the greed of man. It is a story of two tiger brothers, who were captured separately when they were little cubs.

They grew up in captivity and lived their entire life away from the wild. And when they finally meet each other, they are forced to be each other’s adversaries.

The movie with all its might highlights the plight of tigers but also beautifully shows the bonding that two tigers make with their captors. It shows how magnificent creature tigers are and makes the audience root for them.

Life of Pi is an all-popular tiger movie that gained huge success in and out of the box office. It is the story of a young boy who faced a huge disaster in the sea and was left stranded on a small boat.

But that’s not all, with him on that small boat is a giant Bengal Tiger. The two form an unusual bond and come to respect each other’s presence.

The tiger has a central role in the movie and the execution is done impeccably. The movie gives some great life lessons that fit the narrative of the story.