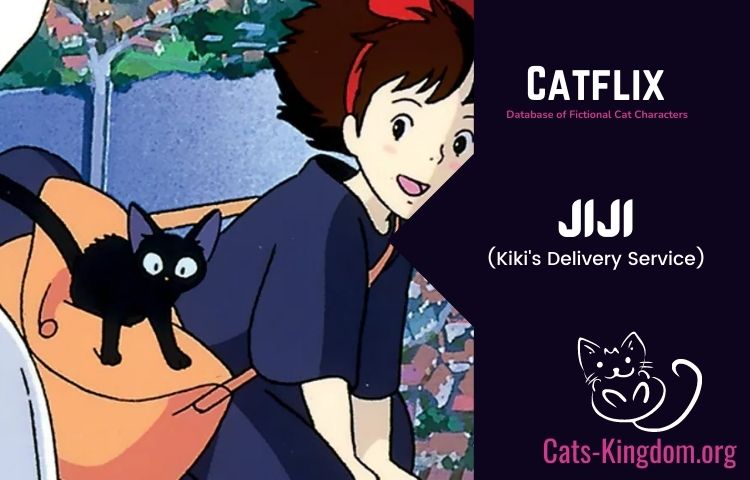 Jiji is the main cat character of the popular Japanese movie Kiki’s Delivery Service. It has been over three decades since the movie was released and it has gained more fame outside the country and the craze is still ongoing.

Few people on the internet and Jiji’s physical feature suggest that he is a Black Cornish Rex cat, though it can be debatable. The main point is that he is one heck of an adorable cat character.

Jiji is an all-black talking pet cat of a 13-year-old girl named Kiki. Kiki is a witch and according to their tradition, all witches have to live on their own for a year after they turn 13.

So she decides to move to a seaside town with Jiji and performs her witch duties from there. Kiki decides to start an Air courier service and tries to live a fruitful life.

She is ambitious, creative, resolute, and faces all the challenges in her life head-on with Jiji always on her side.

Jiji’s Role in the Movie

Jiji in the Japanese version of Kiki’s Delivery Service has an opposite attitude to the American version of the movie. Though there is no difference in the screenplay, the change comes from the different styles of voiceovers over the character of Jiji.

“I’m going to put my paws together and pray that you’re not serious!”
Context: Jiji’s reply when Kiki asks him to accompany her to live in a seaside town on their own

“Smooth. Very smooth. You definitely know how to make a good first impression.”
Context: Jiji sarcastically comments this when Kiki almost comes under a bus trying to impress someone.

“If you wake up tomorrow and find a white cat, it’s me.”
Context: Jiji jokingly says this to Kiki after his paws get covered by flour.

It is always very difficult to make an assumption about that breed of animated cat character when it’s not been mentioned by the movie makers.

But in this segment, we try to make predictions about the cat character’s breed by looking at its physical attributes. Though it sounds dumb, still it is a key part of our post.

All our assumptions lead to one conclusion that Jiji is a Cornish Rex and these are the following reason why we think so apart from the obvious looks.

Movie Clip: Jiji pretends to be a doll

Kiki’s Delivery Service is a certified classic cat movie and its popularity is increasing day by day. The main character of the movie, Jiji is an adorable black cat that steals the show whenever he’s on-screen.

He has been portrayed beautifully both in Japanese and English and it is enjoyable to watch two different versions of him.

The movie has a feel-good vibe and fills your heart with warmth. As for cat lovers, this movie is a must-watch.