How to Bring Down’s a Cat Fever? – Explained In Detail 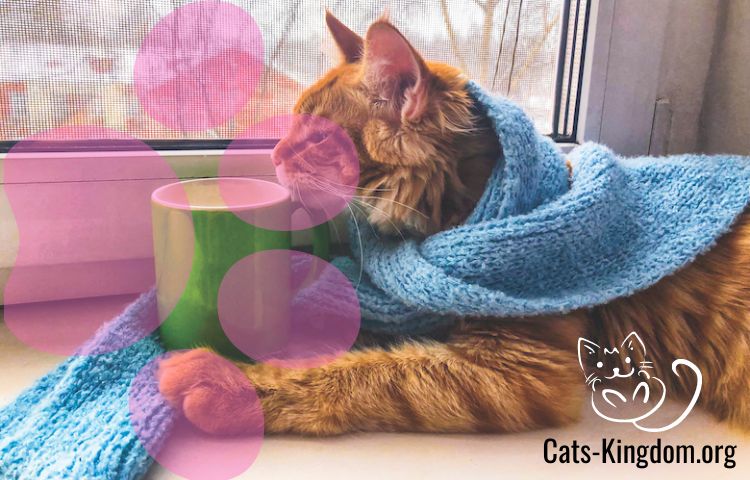 Peggy Lee wasn’t joking when she sung, “Fever isn’t such a new thing, fever started long time ago.” Fever has been a sign of sickness ever since the beginning of time.

An increase in body temperature brought on by a disease is referred to as a fever. It is a thermoregulatory condition in which the hypothalamus purposefully raises the thermostat, resetting the thermal set point to a higher level, causing the body to actively try to elevate its temperature.

Is there a fever?

The normal feline body temperature runs higher than that of humans, typically ranging from 100 to 102 degrees Fahrenheit. Because excitement can raise the body temperature a little bit, I give nervous kitties in my exam room a little slack and allow them up to 102.9. If it hits 103, I consider it a true fever.

Fevers make us humans feel blah, and our first instinct is to try to break the fever. For feverish felines, however, the focus is on finding the reason for the fever. Keep in mind that fever is a symptom, not a disease. It is a healthy, appropriate response to the threat of illness, and it can actually be beneficial. Fevers reduce the division rate of bacteria and enhance the body’s immune system response. Despite their positive role, fevers make cats feel lousy like they do in people, and most cats with fevers become lethargic and withdrawn, and often refuse to eat.

Popular Read:  How to Feed Cats? Answered In Detail

Sometimes the cause of a cat’s fever is obvious. For example, cat bite abscesses are common, especially in cats with outdoor access. Many affected cats will have visible evidence of the abscess on examination, and treating the abscess by lancing, flushing and giving antibiotics usually causes the fever to quickly resolve.

In many cases, however, the cause of the fever is not always obvious. We call this scenario fever of unknown origin (FUO). In human medicine, the term fever of unknown origin has a strict definition: an illness of more than 3 weeks duration with a temperature higher than 101 degrees Fahrenheit on several occasions after one week of hospitalization and evaluation. While there is no accepted definition in veterinary medicine, the term is used liberally to describe a fever that does not resolve spontaneously, that does not respond to antibiotic therapy and for which the diagnosis remains a mystery after an initial diagnostic workup. Cats with FUO typically have body temperatures between 103 and 106 Fahrenheit.

Figuring out the cause of a fever can be a diagnostic challenge. A thorough medical history may offer the veterinarian some clues as to the origin of the fever. Historical information that should be ascertained include the cat’s vaccination status, recent drug administration, whether the cat has traveled recently (domestic or international) and if there has been any potential exposure to infectious agents (a cat show or boarding kennel, for example).

A thorough physical examination is of paramount importance in investigating fevers in cats. Each body system should be meticulously evaluated, with particular emphasis on assessment of the lymph nodes for enlargement and the oral cavity for dental abscesses. Initial laboratory diagnostics should include a complete blood count, serum biochemistry panel, urinalysis, urine culture, feline leukemia virus (FeLV) test and feline immunodeficiency virus (FIV) test.

In many cases, the history, physical exam and initial diagnostic tests reveal the cause of the fever. If not, most veterinarians find it reasonable to treat with antibiotics for a presumed bacterial infection.

If no cause of fever s revealed, or if the fever persists despite antibiotic therapy, further diagnostic tests are warranted. In 10 to 15% of FUO cases, a cause is never discovered. As you might imagine, I have found FUO to be among the most challenging diagnostic situations I have faced as a feline practitioner.

Management of cats with FUO is based on finding and treating the definitive cause of the fever. Although antipyretics — drugs that lower fever — are given to people early in the course of the fever, they are not typically advocated in cats.

Cat owners should never attempt to treat their cat’s fever at home. The drugs that humans usually take for fevers, like acetaminophen (Tylenol), ibuprofen and aspirin can have harmful and sometimes fatal side effects.

Cats with fevers often have a poor appetite, and dehydration is a concern because fever increases a cat’s fluid requirements. The common medical advice to “get lots of rest and drink plenty of fluids” is not easily applied to cats. Some cats with FUO may benefit from hospitalization, intravenous fluid and antibiotic therapy and aggressive nutritional support until a cause of the fever is discovered or the fever resolves on its own.

Fever is a common symptom of illness in cats. The prognosis for recovery depends on the cause. In the case of minor infections or illnesses (abscesses, upper respiratory infections), treatment of the illness resolves the fever. For more severe underlying illness, recovery may take more time and require more intensive treatment.

Popular Read:  Why You Should Trim Cat Nails?
Tags:Cat Care
previous8 Amazing Facts About the Cat Nose and the Cat Sense of Smell
next5 Ideas At Home Cat For Scratch Treatment