When Do Kittens’ Eyes Change Color? – Explained In Detail 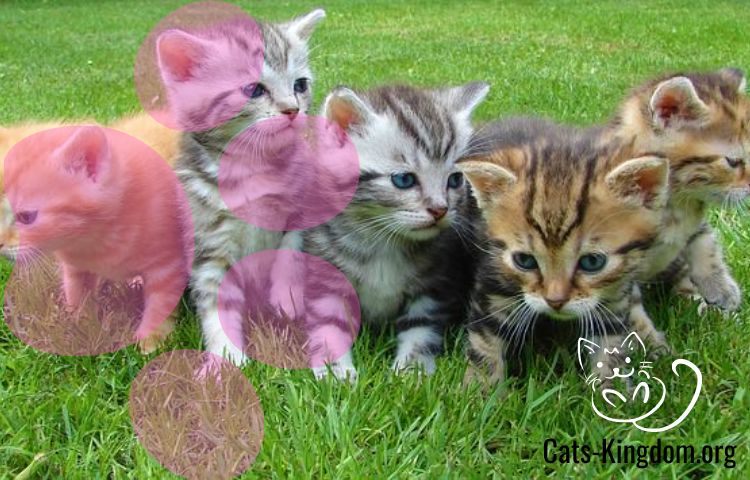 See what your cat is seeing. What shade do they have? Most adult cat eye colors fall on a spectrum that extends from green, gold, and yellow on one side to orange, copper, and brown on the other, with a variety of variants and hues in between. What about felines with blue eyes, though? For kittens have eyes that are supposedly blue at birth, and some cats seem to keep their eyes that color all their lives. Why do I need qualifiers like “nominally” and “apparent” when describing a color? And when, and why, do kittens’ eyes change color?

Instead of being a product of pigmentation, the range of blues that we can perceive in cat eyes are the result of light being bent. Although people mistakenly think of cat eyes as having a blue color, they actually have no color at all and instead reflect light. The amount of transparency of a cat’s outer eye and the amount of pigment present in its iris combine to produce different eye hues in cats. Let’s address the question, “When do kittens’ eyes change color,” and offer some explanation as to how and why this occurs. Some insight into the how and why of kittens’ eyes changing color. Kittens are born with their eyes shut.

What to know about the first month about kitten eyes color

The first step to answering, “When do kittens’ eyes change color?” is to know that their eyes aren’t even open at birth. Upon exiting the womb and entering the whelping box, a newborn kitten‘s eyes are sealed shut and functionally useless. Like their coatless bodies and closed ears, a kitten’s eyes are not fully developed at birth. The only senses that work straight out of the gate are those of touch and smell. With mother’s assistance and protection, a kitten is able to eat and sleep. These activities provide the fuel and raw materials for growth across the board, including preparing the eyes for sight.

Every kitten develops at a different pace, but typically, a kitten’s eyes are sufficiently mature to open during the second week of life, anywhere from 7-14 days after birth. Once the eyelids begin separating, they may take two or three days to fully open. Even then, open doesn’t mean functional. Part of kitten eye maturation is developing the ability to process light and interpret sensory input.

For the first month to five weeks, a kitten can see about as well as Han Solo fresh out of his carbonite prison in Return of the Jedi, when everything appeared as a “light blur.” Also like Han Solo, who stumbled about a bit at first, hand-eye — or paw-eye — coordination is still very likely a work in progress for a kitten. Most kittens will achieve full ocular and visual functionality at some point between weeks 5 and 7.When do kittens’ eyes change color?

When do the eyes of kittens change color?

During this developmental period, a baby kitten is learning to see, but her eyes will not be fully mature — including assuming their lifelong adult coloration — until she is anywhere from 3-6 months of age. It’s vision first, color second for kittens. For the first several weeks after a kitten’s eyes open, they appear to be blue. This hue is the effect of light refracted off the cornea, the eyeball’s outer transparent covering and the relative thickness of its four layers. As cat eye color matures, our perception of it continues to be affected and influenced by this refracted blue or blue-green outer covering.

So, when do kittens’ eyes change color? By week 6 or 7, a kitten’s eye color begins to change. The iris, the colored part of the eye, contains melanocytes. Once the eye is sufficiently mature, these melanocytes begin producing melanin, pigment that gives the eye its mature adult coloration. How many melanocytes there are and how much melanin they yield determines the final color and its depth or intensity. On the spectrum we mentioned above — green at one end and brown at the other — light green means a cat’s iris has produced the least amount of melanin, and brown the most.

Popular Read:  Why Do Cats Purr? - Answered In Detail

There are exceptions to answering the question, “When do kittens’ eyes change color?” — including blue-eyed adult cats and cats with heterochromia iridum, or two different-colored eyes. Cats who retain blue eyes into adulthood do so because of low or no melanin production. Examples include colorpoint cats, like the Siamese, and those breeds who developed with the Siamese as a major genetic contributor. Among them:

Like their fascinating coat-color distribution, the blue eyes in colorpoint cats result from a form of partial albinism. In these cats, blue eyes, like limited coat color, is due to limited melanin. Blue-eyed adult cats are also typical of the Ojos Azules, and in shades much deeper and darker than are typically seen among the melanin-deficient colorpoint breeds.

For cats with white coats and some bi-colored cats, blue eyes as adults can be the result of genes that suppress or mask other pigments, rather than a simple lack of them. Where blue eyes in colorpoint cats are a result of a partial albino heritage — the Siamese and its cousins have white coats before their color patches develop — an all-white cat is not necessarily an albino itself. You can distinguish between a white cat and a true albino by the eyes, which range from pale blue to pink. Like the blue, pink is not a color inherent to the eye, but a reflection of blood vessels at the back of the eye.

Does the color of cat eyes change with age?

Cat eyes are as mysterious and inscrutable to us as the creatures themselves. Ideally constructed for use by nocturnal predators, they are extraordinary organs. They can detect the slightest movements in situations where there is practically no light available. What’s truly remarkable is that when a kitten is born, she is functionally blind, and her eyes grow and develop along along with the rest of the body.

From the moment a kitten is born until he can safely undergo a spay or neuter procedure, a number of developmental changes occur. Since many of us only adopt cats after they’ve been weaned, we completely miss this period of rapid maturation. Eye color change is one of the last processes we can actually observe if the timing is right and if the kitten’s pace of development is slow enough.

Once a cat is physically mature, her eyes should remain a consistent color throughout life. If you notice a dramatic change in eye color in a grown cat, it could signal a number of health issues, ranging from eye infections and uveitis to leukemia and feline immunodeficiency virus. As with any sudden outward change, the best thing to do if you notice such a change is to consult a veterinarian.