Why Does Cat’s Nose Change Color? – Answered In Detail 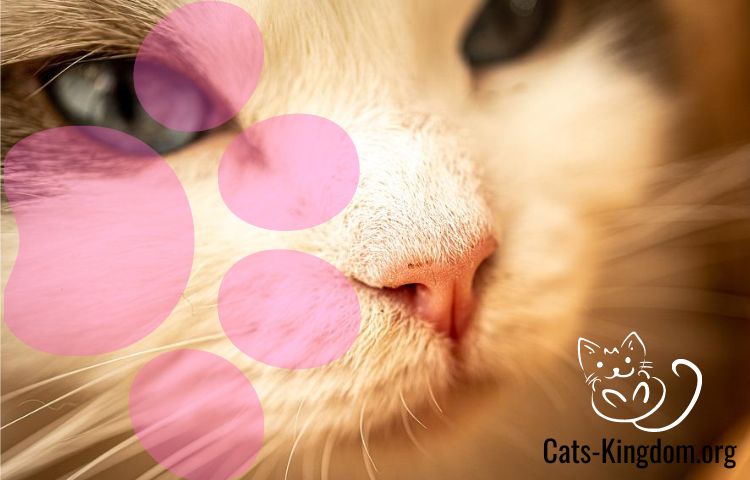 I initially believed I was dreaming it when I observed that my calico cat Merritt’s nose was pinker than usual. But as it kept happening, I started to wonder and feel a little worried. Merritt is one of those dog-like cats, so when she was aroused or after playing fetch, her normally pale pink nose would turn a brilliant, hot pink. This made me wonder: Is it usual for the colour of my cat’s nose to change?

Merritt as a kitten, with a very faint pink nose, at rest. She didn’t yet have her adorable little nose freckle (more about that later!)

Why does the color of a cat’s nose change?

If, like me, you’ve noticed your cats nose getting brighter and more vibrant like some sort of kitty Rudolph on a foggy Christmas Eve, you’re not alone.

“Cats noses can change color from light pink to darker pink, normally in times of excitement or stress due to a temporary elevation in heart rate and blood pressure,” says Jenny Kistler, DVM at Brandermill Animal Hospital in Midlothian, Virginia. “This is a normal event and is usually nothing to worry about as long as it is short term.”

Dr. Sasha Gibbons of Just Cats Veterinary Hospital in Stamford, Connecticut, says that temperature also plays a role in a cat’s nose changing color. “The cat’s nose is highly vascularized (which means it has numerous small blood vessels throughout it),” Gibbons says.“These blood vessels can grow or shrink with different variables (such as heat, cold and high or low blood pressure). This can cause variations in the pink coloration of the nose. For instance, when a cat is cold, the blood vessels are smaller so the nose might appear light pink. When a cat is hot, or blood pressure raises, the vessels are larger so the nose may appear darker pink or red.”

Popular Read:  How To Get Rid Of Fleas On Your Cat ? - Explained In Detail

We are a two-cat household but I only see the color changes happen to Merritt’s nose. My other cat, Gabby, is a colossally large and lazy tabby who doesn’t play or get excited about much in life (besides catnip). He has a pink – albeit a darker, more pigmented pink — nose.

In turns out that this phenomenon is simply more noticeable in some cats. “All cats have the same anatomy of the nose, but the variations are much easier to see in cats with light-colored noses,” says Dr. Gibbons.

How are these nose color changes different from nose freckles?

You may be reading this article thinking, “but what about those little dots on my cat’s nose?!” Good news — those spots, aka nose freckles or lentigo, are normal, too. And, like a cat’s nose changing colors, they also only show up on certain kitties.

“Freckles can appear in cats carrying the gene for red color, such orange- or cream-colored tabby cats and calicos,” Dr. Jane Brunt, CATalyst Council executive director and American Association of Feline Practitioners’ past president, explains. “They show up as dark brown spots near the mucous membranes so you might see them on the nose, lips and eyelid margins and they tend to increase with age. These freckles or ‘age spots’ are usually harmless. Have your veterinarian note this at each yearly exam, and you can even take photos to watch them over time.”

This cool coloration occurs on both of my cats. Merritt, a calico, and Gabby, a cream-colored tabby, both have one small nose freckle on their left nostrils. Even though they are definitely not related or even the same age, I think of this as a cute little sibling tattoo or the equivalent of a kitty nose ring they got to rebel against their cat mom (me).Merritt excited to take possession of my purse as you can tell by her bright pink nose. Or, maybe she’s anxious about dad folding his laundry in the background! Photography courtesy Cait Rohan Kelly.

Popular Read:  How Much to Feed a Kitten? - Detailed Information

Should you ever be worried if your cat’s nose color changes?

A cat’s nose changing color because of a toy chase is one thing. But are there any times you should see your vet about it?

“It’s important to know what’s normal for cats, and for your cat, and noticing the color of your cat’s nose indicates you are an observant and caring cat parent!” Dr. Brunt says.

According to Dr. Brunt, here’s what’s not normal when it comes a cat’s nose changing color:

Dr. Kistler also notes that nose color changes and nose freckles are most likely normal. But “you should be concerned and contact your veterinarian if you notice any raised, discolored areas on the nose, as well as ulcerations, erosions, swelling or bleeding.  These can be signs of more serious problems,” she says.

When should you be concerned about cat’s blood pressure?

“As in people, high blood pressure or hypertension in cats can be a silent and serious health problem,” explains Dr. Brunt. “That’s why screening is so important in adult and senior cats and your cat-friendly veterinarian will be able to do that. When hypertension is advanced, in addition to a pinker nose which may be difficult to notice since it tends not to change, other signs can include yowling, pacing and blindness. Hypotension, or low blood pressure, can occur as a result of illness or injury and your cat may appear lethargic or sleeping more than normal.”

In other words, cat nose color changes are usually nothing to worry about unless you notice other out-of-the-ordinary symptoms. Chances are you’re already an observant cat parent if you’ve noticed that your cat’s nose changes color. Keep up the good work!