Why Do Cats Lick People? – Answered In Detail 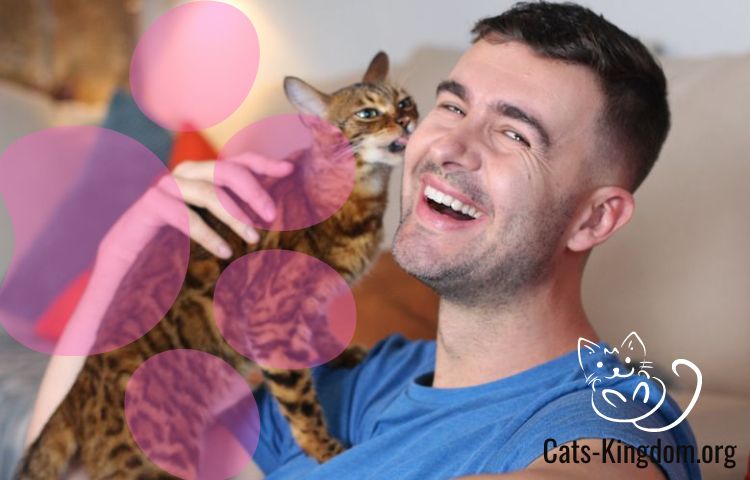 What makes cats lick humans? What about cats that lick their owners’ hair? Here are some of the explanations on why cats groom people, as well as my own experience being groomed by a cat: Experts advise that I should be honoured. G.G. is “grooming” her person, just like many of our feline pals. But shouldn’t it be our responsibility to groom them using equipment like cat brushes and nail trimmers? Yes, but cats give back by grooming people using their own techniques.

Therefore, why do cats groom people? Marilyn Krieger, a licensed cat behavior specialist in the San Francisco Bay area, suggests taking it as a complement. Cats groom people for two reasons, one of which expresses intense fondness.

In the wild, cats identify friends and family by grooming each other, which leaves their scent on each cat and kitten. In feral-cat colonies, where many females have litters, they all take care of the kittens and mark them as part of the tribe, Krieger says.

So, when cats lick humans, they are expressing the same sentiment: “I like you. You’re a friend/family.” And both female and male cats do it.

“Grooming is big,” Krieger explains. “Feel honored, because she feels that you are part of her family and part of the colony. She’s put her smell on you.”

A cat’s scent doesn’t just come from his oral glands. Cats also have scent glands in other body areas, including at the bottom of their paws. So, if they stroke you with their paws or butt you with their heads, they are depositing their scent and expressing affection and acceptance.

Even if they don’t lick you, do cats still love people?

Some kitties just aren’t lickers, Krieger says. But you can be confident that the cat likes you if he does lick you, unless it’s for the second reason (read on).

“It’s an individual thing,” she says. “If you’re a stranger and the cat doesn’t like you, he won’t groom you.”

Sheryl Nordstrom, of the Phoenix area, has two gray brother cats — Dusk and Mere. Dusk often licks her hand when she pets his tummy, after grabbing her hands with his paws.

“I love it when he grabs my hand and licks it,” Nordstrom says about Dusk “He is a very sweet kitty.”

Mere, on the other hand, loves to sit on laps but doesn’t lick, she says.

Cats licking your hair: why?

“Brushing” a human’s hair, like G.G. does, is not as common of a grooming behavior as licking, Krieger says. Some cats also might chew on your hair, but don’t let them, she says: Your cat could ingest your hair, and they do enough of that with their own. Also, if your cat licks you, make sure you aren’t wearing makeup or anything that could be toxic, Krieger cautions.

Cats don’t necessarily lick people because they adore them

The other reason that cats groom humans isn’t as personal or flattering. You may be wearing something on your skin or hair — lotions, cleansers, etc. — that smells or tastes yummy to them, Krieger says. Or, maybe you have the residue of tuna juice on your fingers after mealtime.

Popular Read:  Should My Cat Sleep With Me At Night? - Answered In Detail

Whether you are loved or yummy, just like not all cats groom people, not all human “groomees” enjoy it. If the licking or grooming annoys you, don’t reinforce the behavior by rewarding it, Krieger says.

“Some people don’t want to be slimed; some people think it’s really cute,” she says. “I have some clients whose cats do that while they are sleeping, and it’s to get their attention or food.”

Tags:Cat Behavior
previousHow to Keep Your Hairless Cat Safe in the Sun? – Explained In Detail
next7 Symptoms That Your Cat Is Grieving