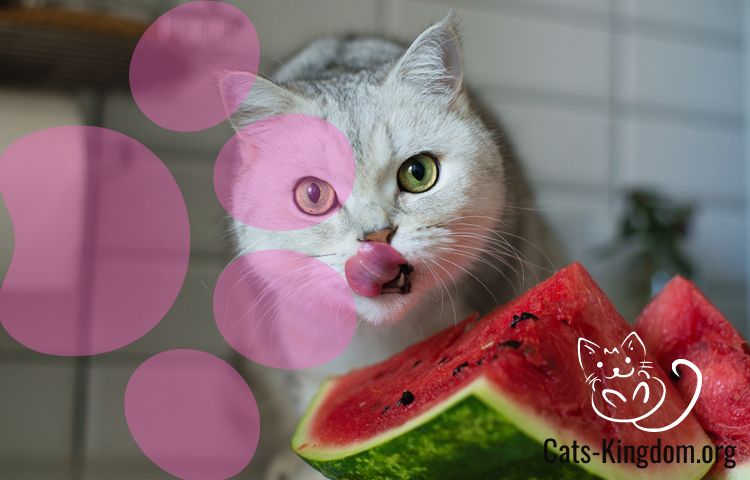 For me, the taste of summer is watermelon. Does your cat request a watermelon slice?

We’re going to examine if watermelon is healthy for cats, how much they can eat, and whether they can have it.

Benefits Of Watermelon For Cats

Unsurprisingly, the main constituent of watermelon is water. In fact, watermelon is often recommended as a tasty way to stay hydrated in the summer months, especially as the low calorie count reduces the risk of obesity from eating watermelon.

Other than water, watermelon’s main constituents are carbohydrates, most of which are natural plant sugars and give it its sweet taste.

Watermelon is considered a good source of vitamin C and vitamin A, and also contains copper, which can be hard to find in high-meat diets. Although it contains potassium and magnesium there is more of these important minerals in many other fruits.

Unlike most fruits, watermelon doesn’t provide much in the way of fiber or plant compounds such as antioxidants. It is, however, high in lycopene, an important carotenoid also found in tomatoes. According to the USDA, watermelon actually contains more lycopene than tomatoes, gram for gram.

Yes! Cats can eat watermelon! Despite being carnivores for the main part, many cats actually enjoy snacking on watermelon.

As with all foods that are not part of their usual complete and balanced diet, you should feed it in moderation. Although watermelon isn’t really high in sugar, it can contain enough to cause an upset stomach in cats. To avoid this, only small pieces of watermelon should be fed, and only occasionally.

The other thing to be aware of is the watermelon seeds. These seeds can cause a problem for two reasons. Firstly, the seeds are big enough that they can cause choking.

Secondly, if your cat chews the watermelon seeds, they release amygdalin. Whilst amygdalin isn’t a problem in itself, it is changed by the body into cyanide, a toxic chemical. However, the amount of cyanide in one or two seeds isn’t enough to cause problems for your cat. Whilst you should take them out if at all possible, if your cat eats one that falls on the floor they’re unlikely to have any ill effects. Even better, find a seedless variety.

Are Watermelon Good For Cats?

So, cats can eat watermelon, in moderation. But does watermelon have health benefits for cats? Watermelon has a high water content, and is low in calories, so it’s not full of important nutrients. However, this can be useful in itself.

How Much Watermelon Can A Cat Eat?

As we’ve said, moderation is key. Giving your cat too much watermelon can cause more problems than it solves, especially if they get diarrhea and vomiting!

The sugar content of watermelon also means it should be given with caution to diabetic cats.

Calorie-wise, your cat needs to have no more than 10% of his calories from all his treats, including watermelon. The good news is that watermelon is low in calories, so this is quite easy to do.

A 9lb cat can have about 20 calories of treats each day, which is around 70g of watermelon. However, this is probably still too much for your average cat!

I would advise that pet owners wanting to share watermelon with their feline friend start off with a piece no larger than a half-inch cube. Don’t forget to remove the seeds!

If your furry friend likes the watermelon, and doesn’t have adverse effects such as an upset stomach after 24-48 hours, you can move to give them a little more next time. However, I wouldn’t feed more than an inch cube per day.

Cats can have watermelon as a healthy treat, and, whilst not a vitamin powerhouse like other fruits, it might be a good way to ensure they stay hydrated. Like all human foods, watermelon isn’t balanced and shouldn’t be fed to your cat in large amounts or as their main meal- it’s best as an occasional snack alongside cat food.

Popular Read:  Why Cat Wakes You Up at Night? - 6 Reasons

Remember to remove the seeds, though, and don’t feed the hard outer skin, which is not digestible and is a choking hazard as well as likely to cause bowel obstruction