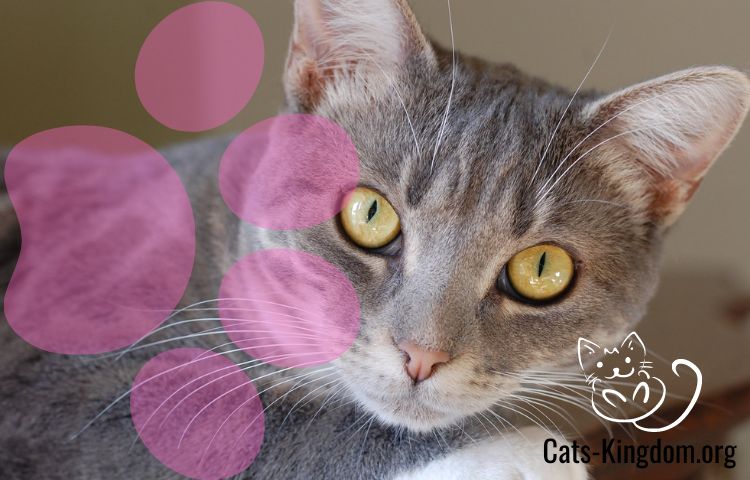 Of all the cats in the world of felines, the gray tabby cat is arguably one of the best-dressed kitties around. Gray tabbies sport that striking “M” on their foreheads like crowns. Remember — tabby is not a breed of cat, it’s a reference to a most recognizable coat pattern. The striped tabby motif appears on almost every type of cat from the ubiquitous Domestic Shorthair to the rarer Scottish Fold.

1. 50 Shades of Gray and Two Spellings

Is it gray tabby cat or grey tabby cat? According to Merriam-Webster, both spellings are correct for these two adjectives. Gray is the more popular spelling in the United States while grey is more prevalent in England. One mark of distinction for this fabulous feline is that Valspar has an interior paint color called Tabby Cat Gray! Gray is sometimes also referred to as blue — but let’s not split hairs.

A gray tabby cat might have a variety of eye colors. And tabbies are also known to have brick red or gray pads on their paws. Genetics determine those tabby nose colors … but cat parents should know that cat noses can change color!

Male cats get their coloring from their mother’s genes while female cats get a gene from each of their parents. Unlike orange tabby cats, gray tabbies can be found in both sexes equally. Tabby is considered a dominant trait, so it’s not surprising that the stripy tabby pattern is not only featured across breeds but also many members of community cat colonies boast the striking design.Popular Read:  Why Does My Cat Scratch The Sides Of The Litter Box? – Simple Explanation

Popular Read:  7 Ways to Get Your Cat to Like Using the Litter Box

The tabby stripes are also believed to be the best for camouflage. This strategic coat helped Felis catus survive on their own before becoming indispensable to the humble human. In fact, many of our house cat’s closest wild relatives hew to their tabby patterns. Lynx, the sand cat, Pallas’s cat and the Scottish wild cat are just a few whose appearance looks much like our domestic cat … but they’re best suited to hunt real prey, not catnip toys. And tabby is the coat of the “first” domesticated cats — the African wild cat, the Asiatic wild cat and the European wild cat. So, it only seems fitting that the tabby pattern is linked to the same genetics that give cheetahs their spots!Timmy the gray tabby cat. Photography by Denise LeBeau.

As tabby patterns are prevalent across feline breeds, many community cats (a.k.a. feral cats) boast tabby coats. While there are some true feral felines who prefer to eschew human contact, many youngsters are friendlier to people. Or they simply come around because yummy food and a chin scratch feels pretty good. Partnerships between community cat caregivers and local shelters help save more cats’ lives. Through these partnerships, kittens get adopted into loving homes. Especially tabbies! I got to meet a sweet gray tabby cat named Timmy who represents all that’s wonderful about these partnerships and the stripy, tiny ghost tigers they rescue.

Timmy was accepted into the North Fork Animal Welfare League’s kitten program through a community cat caregiver. Its kitten room has a range of very friendly to extremely shy residents. Packing special salmon treats, I went into the room to see who could be plied with delicious goodies. Some kittens climbed right on my lap. Others would only accept a treat if it was tossed a safe distance away. But then there was Timmy, a gray tabby cat.Popular Read:  Why Does My Cat Scratch The Sides Of The Litter Box? – Simple Explanation

Popular Read:  Why Does Cat Growl ? - Explained In Detail

Whether they’re from purebred origins or plucked off the streets, on the hunt for food or on the hunt for new friends, gray tabby cats have personalities that are as distinctive as their coats. They’re beautiful creatures on the outside and unique souls on the inside. It’s hard not to fall for a gray tabby cat. Adopting one, or two, gray tabbies is a surefire way to ensure there is a lot of love in your future.