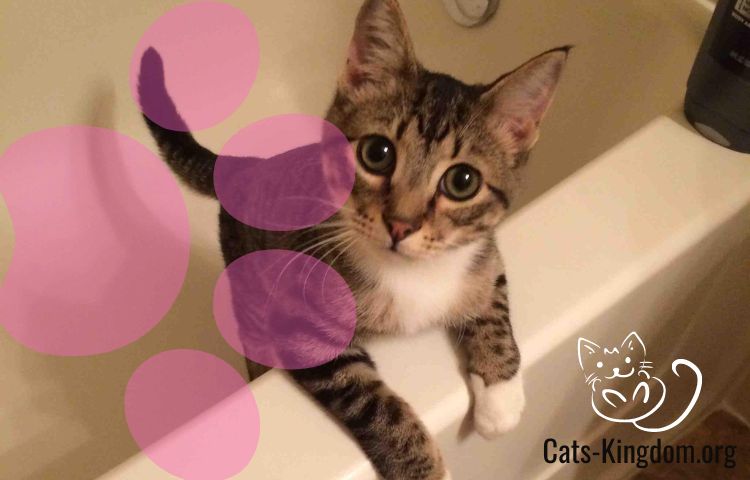 It just doesn’t make sense. They enjoy using the restroom but detest getting wet. In a muggy bathroom, my cats are a puzzle wrapped in a soggy enigma, but they’re not the only ones. Since there has been indoor plumbing, cats have likely been curled up in sinks.

Kittens don’t just appear to think restrooms are the ideal places to be, despite how nice and comfortable the sinks are. Let’s look at five causes for why I can’t have any privacy in the bathroom.

1. Cats enjoy being near water but detest being in it

Shortly after we adopted Ghosty we found out just how much she hated water. After the poor girl had an accident while traveling in her carrier, my husband took it upon himself to give her a shower. The aftermath was a very wet and very angry Ghost Cat.

I thought that her traumatic shower experience would keep her out of the bathroom, but Ghost Cat was not about to give me any alone time in there. She just could not stand to see that door closed.

Meanwhile, I couldn’t stand to hear her cry on the other side of the door, so I started letting her come into the loo with me. To my surprise, Ghost Cat loved my long hot baths almost as much as I did. She’s sit on the side of the tub and dip her toe in every once in awhile.

Every cat guardian knows that toilet paper must be guarded, or the humans in the household will have to get used to wiping with shreds. It seems no cat can resist a white spool of Charmin. Those soft cylinders make for fun games of unravelling and shredding.

Even though I’ve always let Ghosty join me in the john, she’s rarely been allowed to be in there alone. Our old loft apartment had no storage to hide the extra rolls in, so Ghost Cat would make quick work of our paper if she got in there unsupervised. From unrolling it, to chewing on it and even knocking it into the still wet bathtub, Ghost Cat seemed determined deny us our loo roll. Our kitten Specter shares her predecessor’s obsession with toilet paper, so the door to the bathroom is always closed in our home.

3. The flavor of human bathwater is adored by cats

If you’ve got a cat who won’t drink from her water dish, water cooler or water fountain, just try taking a bath with her in the room. For some reason, Ghost Cat just can’t pass up the opportunity to sip from a tub I’m soaking in, or lick the shower floor after I pull back the curtain.

Specter still isn’t big enough to sit on the ledge and lean in for a sip. Instead, what she likes to do is jump all the way into the tub after it’s been drained and lick up any little remaining droplets. She also likes to lick my wet feet when I’m drying off (she’s weird like that).

Cats don’t need privacy to go to the litter box, and mine seem to think that humans shouldn’t either. Back in our old apartment everything was out in the open — including Ghosty’s litter. I’d be stirring the spaghetti and she’d lock eyes with me while fertilizing her sand. Now that our compact downtown days are behind us, we’re basking in the square footage of our little bungalow, so Ghosty and Specter have their own special cat room to squat in. I think Ghost Cat still remembers the days when she was expected to poop with an audience, though, because she sure thinks I should have one. I have to tell my cats shoo so that I can … you know.

Popular Read:  What It Means When Cat Ears Are Back?

I will always brush my teeth and even bathe with them in the bathroom, but despite what Ghost Cat thinks, there are some times when a girl just needs to be alone with the throne. If I shut the door on my cats they’ll either go bother my husband until I return from the bathroom, or they’ll both plop down in front of the bathroom door and just wait for me to come out. I have to admit, it’s kind of oddly adorable and heartwarming to open the door to find your little furry friends have been waiting on you. The dog has only been here a few weeks and he’s already joining Ghost Cat and Specter in their bathroom door vigil. It’s weird that they want to be with me when I’m doing that, but it’s sweet that they can’t wait for me to come out.