Why Do Cats Hate Dogs? 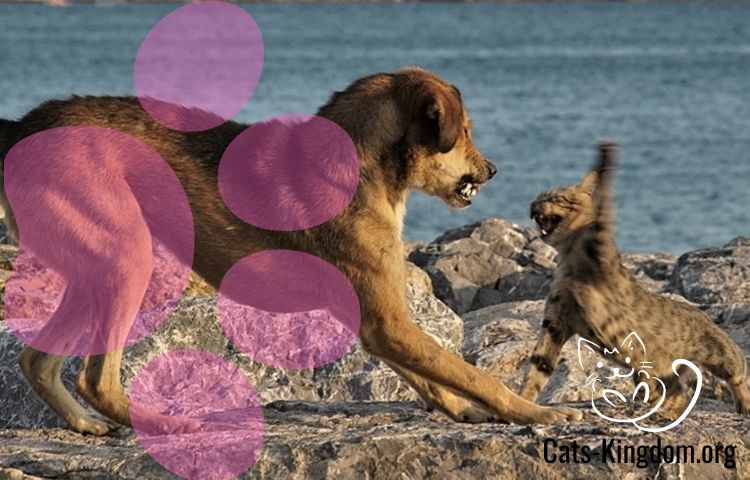 How come cats despise dogs? Some cats are dog-phobic, and when they engage with dogs, it usually involves hissing, chasing, and barking. There are many instances of canine-kitty love, therefore there must be explanations for why some cats despise dogs while other felines get along just well with their canine companions. Let’s examine the response to the query, “Why do cats despise dogs?” and some methods for overcoming the negative feelings!

Why do cats hate dogs?

Why do cats hate dogs? Dogs are descendants of naturally social wolves, while cats’ ancestors are Arabian wildcats, who were known primarily to be loners. Even now, thousands of years later, domesticated dogs and cats possess some of their predecessors’ traits. Dogs have an instinct to chase small prey — especially if it’s fleeing. It’s no secret that cats typically don’t enjoy being chased, even if dogs view it as a game.

Additionally, dogs have an innate “in your face” attitude — they’re your immediate best friend. Cats, on the other hand, tend to hang back and assess a situation before extending their friendship.

Cats and dogs are made to get along by people

Certified Animal Behavior Consultant, Amy Shojai, explains: “Cats and dogs, though different species, often accept and even welcome each other as part of their extended family. Careful and patient introductions increases the odds for a smooth transition and acceptance. People need to recognize that cats and dogs communicate differently, and want different things out of life, so there can be misunderstandings. It’s up to people to interpret and provide structure so they enjoy each other and get along.”

Popular Read:  Why Does My Cat Follow Me To The Bathroom? - Explained In Detail

“Provide enrichment for both,” Shojai continues. “Second-story property for cats in the form of cat trees, perches and window views; and floor-level toys, chews and sniff-games of fetch-and-find for dogs. Dogs want to belong to a family group (and cats can be part of that), while cats want to own and control territory. Since dogs can’t climb, it works out purr-fectly for both!”

What makes cats dislike dogs?  The way you introduce cats and dogs matters

Cats and dogs need time to acclimate to one another, and a forced introduction only heightens adversarial urges. Because cats and dogs possess different comfort levels when it comes to friend-making, the introduction process needs to be a gradual one. Make sure the cat has an easy escape if he decides to exit the situation. Many kitties enjoy elevated resting places like cat trees, which provide the perfect getaway from often overzealous canines.

Bring both animals into the room at the same time, and keep the dog on a leash at your side. If the dog tries to lunge forward, lead him a few steps backwards until he demonstrates a calm demeanor. Gradually inch back toward the cat, and reward the dog with treats for each relaxed forward movement. At the same time, the cat learns he can share a room with a dog without being attacked.

After the initial introduction, separating the dog and cat with a baby gate is an easy way to put distance between them while they get to know one another. Don’t ever place a cat in a dog’s face as a form of introduction. This could not only escalate into a dangerous situation, it could be a backward move in the onset of a peaceful relationship.

Why do cats hate dogs? The age they’re introduced plays a part.

Cats and dogs get along better when they’re introduced as kittens and puppies. They’re just learning about the great big world, and are more open to developing new friendships.

The compatibility of various dog breeds with cats may vary.

As mentioned, personality and a few other factors play a part, but there are some dog breeds that are known to live more harmoniously with cats.

Check background before adding dog to your family

If you have a kitty and you’re adopting a dog, always ask the shelter about the animal’s background. Make sure he doesn’t have a history of aggression toward other animals.

To ensure that your dog and cat get along, make your home ready well in advance

Try to slowly create the atmosphere that the existing pet will experience before the new pet comes on the scene so the change isn’t as drastic:

In truth, you never know if a cat and dog will live together peacefully, but you can take steps to decrease the odds of cats hating dogs.