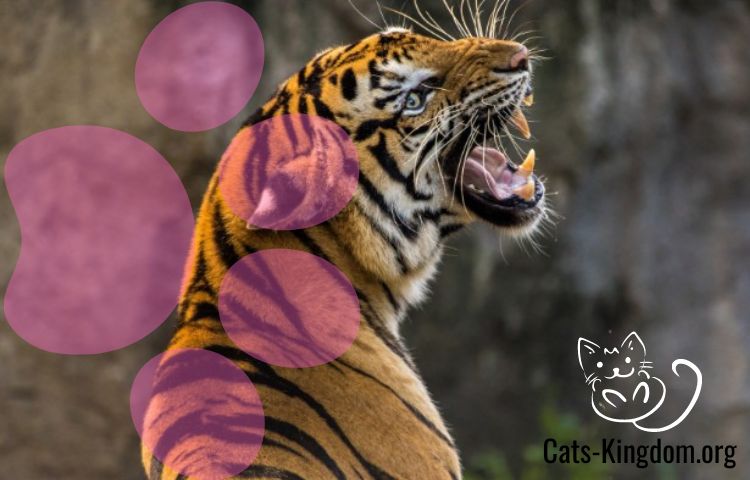 If you enjoy domestic cats, it’s likely that you also have a sweet spot in your heart for large cats. These untamed cats are majestic, interesting, and all three at once.

The fact that their populations are severely declining is distressing to consider, but happily there are organisations and laws in place to assist safeguard and preserve these great animals in the wild.

1. All know that Big Cats Roars, But Some Are Also Known For Their Purrs, Too.

When it comes to big cats, lions, leopards, jaguars, and tigers can all exhibit a mighty roar. But when it comes to those larger big cats, they cannot purr. However, cougars, and other smaller big cats, such as lynxes, ocelots, and bobcats, can all purr. Which makes them pretty special!

2. The Siberian Tiger is the Largest Big Cat.

The Siberian tiger is one of the six surviving tiger subspecies. It can reach up to ten feet in length from nose to tail, and some can tip the scales at 650 pounds. Imagine encountering that in the wild!

4. Cheetahs and their Chirps.

Cheetahs are the fastest of all the big cats, and while they’re known for their speed and those glorious spots, they’re also loved for their chirps, too. Chirping is a similarity that domesticated cats and cheetahs both share.

However, these two species do this for very different reasons. Cheetahs will chirp to attract mates, or cheetah cubs will do this to communicate with their mother.

5. The Spots And Stains on Many Big Cat Species are there for a Reason

When it comes to big cats, many of them have amazing markings which help them to survive in the wild. For example, the spotted cheetah is also easily recognized for the long black tear-like stains running down their faces from their eyes.

These stains—AKA malar stripes—help to deflect the sun and allow them to see better. For tigers, many have white spots on the back of their ears which act like eyes when observed by other animals.

You will often see their ears titled backward when they’re drinking from a water source. These serve as a telltale sign to “keep away” in the minds of other animals.

6. Every Big Cat is not an Apex Predator.

The Lion King taught us that lions are at the top of the “food chain,” but the same cannot be said for all species of big cats. For the big cats, which are apex predators, such as tigers, lions, and jaguars, their only threat in the wild is humans who hunt big game.

It’s a sad reality and something that pains many big cat lovers worldwide. However, smaller big cats are often hunted by larger predators—which can even be other big cats larger than them.

7. The Black-Footed Cat is The Mightiest Hunter Of All Big Cats.

These cats are lethal assassins when it comes to their hunting abilities. These tiny hunters range from 2.5-5.5 lbs, which makes them even smaller than your average house cat.

With a kill rate of 60%, these cats are about 3x better at hunting prey when compared to a lion. There are even legends surrounding this tenacious hunter, saying that one once took down a giraffe as their prey.

8. Except for Lionesses, All Big Cats Live Solitary Lives

If you’ve ever watched lions on the National Geographic channel, you know that lionesses stay together. But for other species of big cats, the only bonds are with mothers and their cubs, as most prefer to live solitary lives in the wilderness.

9. The Amur Leopard is the Rarest Big Cat.

Native to Far East Russia, the Amur Leopard is incredibly allusive and hardly ever spotted—no pun intended. These stealthy hunters are the masters of camouflaging themselves from humans.

And it’s been suggested in recent years that there are likely less than 100 of these big cats left in the wild. These critically endangered beautiful big cats are sometimes referred to as the Far East Leopard.

10. The Caracal Cat Is The Largest Of The Small-Big Cat Species.

These eye-catching cats are a sight to behold. From their bright tawny coats and black ear tufts, it’s hard not to admire these stunning big cats. Also referred to as the Desert Lynx, the name Caracal is derived from the Turkish word “karakulak” which translates to “black ear.”

When you’re a big cat the size of a jaguar, your appearance alone can be intimidating. And the jaguar must know this because they don’t have to work hard when it comes to hunting their prey.

That being said, it’s been reported that jaguar cats aren’t too particular when it comes to their meals and that they’ll hunt just about anything that crosses their path. These jungle cats were named from the indigenous word ‘yaguar’—which means ‘he who kills with one leap.’

12. Many Big Cats Love To Swim

We know that our house cats aren’t usually fans of H2O, but several species of big cats love to swim. The tiger and the jaguar are both big cats that love to swim, and they’re excellent swimmers, too. The Bengal tiger is the best swimmer of all the big cat species.

Some other big cats that love to swim that you may not have known are panthers, ocelots, and leopards. These cats swim because they’ve adapted to their environments and use swimming to cool off, get around, or hunt their prey.

13. There are More Tigers Kept As Pets Than Live In The Wild.

However, tigers as pets are a serious problem due to lax laws and loopholes, and people out there are determined to keep big cats as pets—which often does not pan out well for both the person and the tiger. Because of this problem, more tigers are being bred in captivity than those born in the wild, where they truly belong.

14. The Title of Best Jumper Of All The Big Cats goes to The Snow Leopard.

The snow leopard is a favorite among many big cat lovers. These breathtaking felines live in high altitudes and can withstand bone-chilling temperatures thanks to their thick, bushy coats. This is a skilled hunter which can easily hunt prey three times its size, and it can also jump nearly 50′ in height.

Which is a lot, considering that’s approximately 7x their body length. Sadly, these amazing cats have declined in numbers consideredly due to poaching.

15. Many Big Cats Are Excellent Climbers.

We’ve heard many tales of cats getting stuck in trees and needing to be rescued by firemen, but the same cannot be said for many big cats. Several species of big cats are skilled climbers and prefer to position themselves high in the trees.

They do this to remain unseen—but also to sneak up on their prey, who is none the wiser below. Some big cats who are great climbers are clouded leopards (and most leopards in general) and the Margay.

Big cats in the wild near our help. Learn more about them and ways to help protect and preserve them, so they don’t go extinct. Visit Big Cat Conservation to learn more and consider donating today.

Tags:Big CatsCat Facts
previous6 Things To Keep In Mind When Fostering A Pregnant Cat
nextWant To Keep Cats Off Counters? – Here’s how you do it.