Why Does My Cat Bite Me When I Pet Her? – Answered In Detail 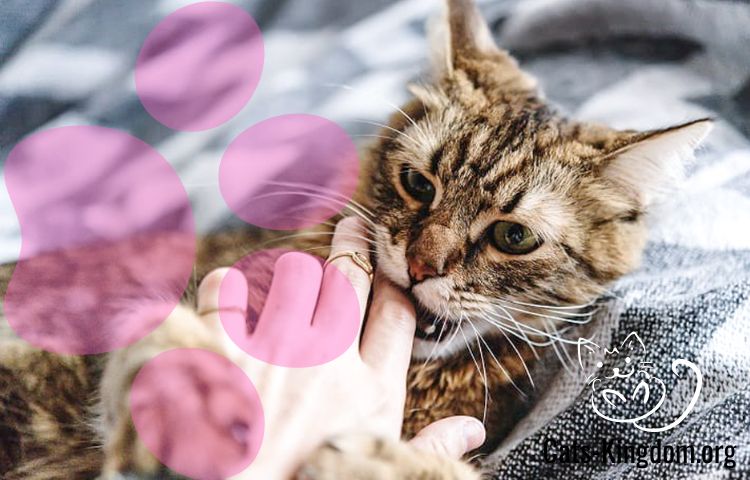 We’ve all had the experience as cat owners where you’re cuddling your cat and she’s purring away, seemingly enjoying a snuggle, and then all of a sudden you feel teeth on your hand and are left wondering what just occurred.

These nips might be described as “petting-induced anger.” We must first distinguish between these nips during petting and an aggressive bite brought on by fear or defensiveness in order to comprehend why this violent behavior occurs when you pet your cat.

Difference Between A Petting Bite And An Aggressive Bite

A bite during a petting session is a gentler bite that you sometimes receive whilst stroking your cat. Usually, they do not break the skin and you will only feel the gentle pressure of your cat’s teeth on your skin.

Any cat bite that breaks the skin has the potential to result in a serious infection so always wash the bite wound well and seek medical advice straight away.

Cats bite for several different reasons. Often, the context of the bite is important to help distinguish why a cat has bitten.

Cats might bite when they are afraid, but you will usually see warning signs like flattened ears and hissing.

A cat that is scared or fearful is more prone to biting aggressively, for example at a vet visit. Usually, there will be warning signs before the bite occurs, such as flattened ears, a rapidly flicking tail, growling, hissing, spitting, and swiping.

Popular Read:  Why Do Cats Purr? - Answered In Detail

If you go to pet your cat in an attempt to comfort them when they are in this state, there is a strong chance that they might bite you out of fear, even if they aren’t normally aggressive.

Sometimes cats bite gently to say they’ve had enough of what you’re doing.

Cats can become easily overstimulated which can lead to frustration. One of the most common ways in which your cat can become overstimulated is through petting. Cats have a much lower tolerance for being petted than dogs do, and different cats will take different amounts of time to reach their limit.

Cats will often express frustration through biting, often as a warning nip as opposed to an aggressive bite. Usually, there will be warning signs preceding the bite that your cat is reaching her tolerance level, such as tail flicking, wide dilated pupils, or vocalizing. You should leave your cat alone if she is showing any of these signs.

Cats that are in pain might bite, even if they are usually very docile.

A cat that is in pain is liable to bite, even if they are not normally aggressive. Just like in people, pain can make them grumpy and if they are injured or painful, and you unintentionally make the pain worse, for example by stroking them or picking them up, they may lash out and bite in an attempt to get you to leave them alone.

Pain from medical conditions such as arthritis or dental disease could lead to aggression when your cat is petted. If your cat is suddenly more grumpy than usual or showing any signs of discomfort, take her to your veterinarian to rule out any underlying medical causes for her behavior.

It’s important to teach kittens that biting human skin during play is not allowed.

Kittens often bite one another during play. Biting is an important part of their development as they learn to hunt and learn to communicate with their littermates and other cats. From about 10 weeks of age, kittens will begin to teethe and this is another reason why they might be biting anything and everything, including you!

Biting is their way of attempting to relieve the discomfort as their adult teeth erupt. Teething biting will usually manifest as a gentle gnawing on your hand or toy, rather than a sudden bite that occurs from nowhere or during play.

Redirect your kitten’s playful biting onto toys and be sure to set aside plenty of time to play with her in short sessions throughout the day.

To avoid an accidental bite during playtime, it’s best not to play with your cat using your hands.

Adult cats also love playtime and will often bite down on toys and other objects that they play with as they mimic hunting and “killing.” If you tend to play with your cat with your hands, you are liable to get bitten during play sessions!

Try and teach your cat from a young age to play with toys rather than hands. Whilst the occasional gentle bite from a kitten might not hurt and even seem cute, a bite from an adult cat is a different story, even if it occurs during play!

Biting for attention is a behavior that should be addressed head on so it does not develop into a serious issue.

Some cats learn to bite as a way of getting your attention. If your cat gently nips you and then rubs their head against you, or then runs to a toy, it’s likely attention-seeking behavior.

If you want to discourage this behavior, do not engage with what your cat is asking for immediately. Instead, ignore your cat for a while before stroking or playing with them on your own terms.

Love bites are gentle little nips that are a sign of affection.

Sometimes referred to as “love bites,” some cats will nip or nibble you as a sign of affection. These will sometimes be accompanied by purring. Love bites are more common in female cats that have previously had a litter of kittens.

Mother cats will often groom their kittens with little nibbles and bites and may show similar behavior toward you.

So, Why Does My Cat Bite Me When I Pet Her?

Cats frequently appear to switch quickly between liking being stroked and having had enough. Cat parents may find this “caressing aggressiveness” perplexing, but it’s actually simply your cat’s way of informing you that they’ve had enough of your petting—for the time being.

One of the most frequent causes of your cat biting you unexpectedly when you’re caressing it is overstimulation. Although it may appear to happen out of the blue, there are frequently unnoticeable indications that your cat has hit their limit.

These are likely to be slightly different from cat to cat but could include things such as: