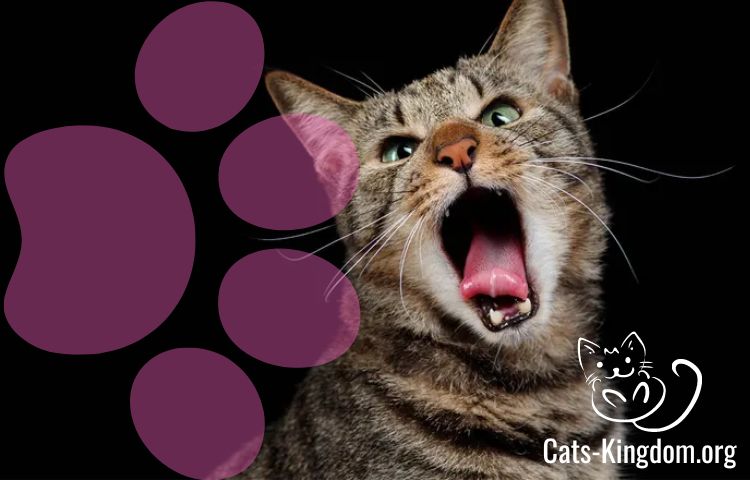 Cats may communicate in a variety of ways, and vocalisation is one among them. This may include common cat noises like meowing, purring, and hissing as well as more ominous noises like howling.

Have you ever heard your cat howl? Our feline friends can make the characteristic sound of howling to communicate with humans or other cats for a number of different reasons.

I. The meaning of howling

Cats have a peculiar vocalisation called howling. Many of you have probably heard it before. It may have been heard when cats are fighting at night or when they are mating.

The sound is similar to a deeper, louder, continuous meow, and is sometimes called to as “yowling” or “caterwauling.”

Now that we know what howling sounds like, why is it that cats howl? There are many reasons for this, some of them are harmless reasons that are easily fixed and others are more serious.

Either way, if your cat has suddenly started to howl, they’re trying to tell you something. It’s important to find out why your cat is howling so that you can help them.

If your cat starts howling suddenly or persistently, take them into the vet for a thorough checkup.

Cats can howl if they’re in pain, distressed, bored, or due to certain medical conditions. We’ll discuss these reasons further below.

Popular Read:  7 Ways to Get Your Cat to Like Using the Litter Box

Cats don’t like it when other cats trespass into their home or territory and this can cause a variety of vocalizations, including hissing, growling, and howling, to make their displeasure known to the other cat.

Cats are crepuscular creatures, meaning that they’re most active at dusk and dawn and this is their favorite time to hunt. Cats that are kept indoors at night might start howling during the early hours to be let outside to hunt. Hunting is a normal behavior to display, even in our pet cats.

Cats that are inactive or under stimulated, might become bored and restless. This can cause a variety of behaviors including cat meowing, howling, or yowling and attention-seeking behavior.

Cats that are suffering from any form of stress might vocalize more. This might include excessive meowing or howling along with other changes in behavior. Stress can come in many forms for cats, such as a new baby in the house, a change of work schedule, conflict with another cat, or if they are experiencing pain or discomfort.

Any cat that is in pain or discomfort may howl or meow loudly to convey this, so it’s extremely important to check for any signs of injury. If your cat is older, it could be a sign of a chronic medical condition.

Conditions like hyperthyroidism (an overactive thyroid) and hypertension (high blood pressure) can cause howling in older cats. This can occur at any time of day or just be at night time (common with hypertension).

Another medical reason that might cause this is cognitive dysfunction syndrome. This can occur in elderly cats and is similar to dementia in humans. It can cause disorientation, confusion, changes in social interaction and changes in their sleeping routine.

Cats that are deaf might meow or howl loudly because they can’t hear themselves.

Certain breeds are more vocal and chatty than others. Siamese cats are famous for their loud meows, which may sound like howling when the cat is trying to get your attention.

IV. Your Role in this

If your cat is howling, try to find out if something is causing stress, pain, or discomfort.

If your cat is howling, it’s likely that they’re trying to communicate with you and it’s important to know why and how to solve the issue.

Keep an eye for:

V. Visit a Vet if

If your cat is howling for no apparent reason, especially if it’s a new behavior, you should see your veterinarian so that they can rule out common causes of injury and pain.

Your vet will take a full history and examine your cat; they might decide to carry out some blood and urine testing to check for the conditions mentioned above. Diagnosing these conditions earlier can improve the long term prognosis for your cat so always seek veterinary attention if you’re concerned.

Your cat isn’t howling to “annoy” you or wake you up at night, they’re howling as a form of communication. Never punish your cat for this behavior—they aren’t doing this maliciously and it’s likely that they’ll just become fearful of you, which will make the problem worse.

Howling is a normal form of communication that our cats display and it’s up to us to determine why they’re doing this in order to help them. It might be caused by hormonal reasons (by not being neutered), boredom, stress, or even medical reasons.

If you’re not sure why your cat is howling or if it’s accompanied by other symptoms, it’s important to get your cat checked by a veterinarian. Never ignore a change of behavior as it could be a sign of an underlying problem.

Tags:Cat BehaviorCat Care
previousWhy Does My Cat Scratch The Sides Of The Litter Box? – Simple Explanation
next6 Things To Keep In Mind When Fostering A Pregnant Cat