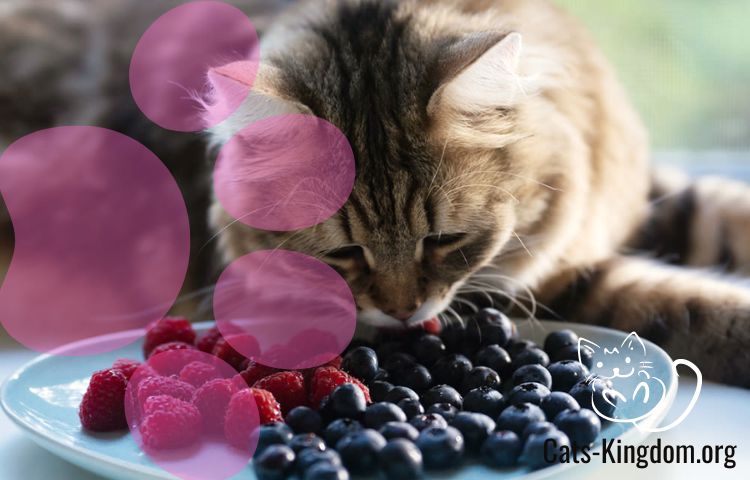 Can cats enjoy the health benefits of blueberries with us?

Does blueberries’ distinction as a superfood apply to cats as well?

We’ll examine whether blueberries can be a part of your cat’s diet, how many blueberries cats can consume daily, and other information about this fantastic fruit.

A fruit that is low in calories and high in nutrients is blueberries. As long as they are given to cats as an infrequent treat in tiny amounts, raw, and without additional ingredients, they are harmless. They are even present in many cat feeds and are important antioxidants!

Not only are blueberries high in nutrients such as potassium and vitamins A, C and K, they’re also low in calories. In fact, they’re about 85% water!

This means that they can be used to re-hydrate both cats and people. Blueberries have a very high vitamin C content, which is important for a fully-functioning immune system.

After reading about how fabulous blueberries are, you’re probably even more interested in finding out whether it’s cats can have blueberries as part of a balanced diet.

The great news is that cats can eat blueberries, as long as they are raw and fresh. Don’t forget to wash them first to remove any traces of pesticides. “Aren’t cats carnivores?” I hear you say! Yes, cats are obligate carnivores- which means they need meat to survive.

However, many cat owners will agree that our feline friends are not above trying the odd fruit or veggies, and many love to snack on a variety of human foods!

What about blueberry juice and blueberry extract?

Well, cats can have juiced blueberries, but you should take care that nothing else has been added to the juice. Most store-bought blueberry juices will be high in added sugars and preservatives, so are not suitable for cats.

You should also take care with cats that scarf their food down – blueberries can be choking hazards. You may wish to cut the blueberries in half to make them safer.

Are Blueberries Good For Cats?

Not only are blueberries safe for cats, they probably give them some health benefits, too. That’s one of the reasons they are included in many pet foods. They also make a great healthy treat that’s lower in calories than many cat treats.

Blueberries may have more antioxidants than any other fruit!

Antioxidants are substances that help your body to fight damaging oxygen ‘free radicals’ – unstable compounds that damage DNA in your body cells.

Blueberries contain a family of antioxidants called flavonoids, which contain anthocyanins, one of the most powerful antioxidants.

Popular Read:  When Do Kittens Open Their Eyes? - Explained In Detail

Antioxidants also have an affect on aging, and it’s possible that they slow the onset of dementia. One review showed an impact on the ability of the older brain to learn- which may help our older cats keep mentally active into old age.

Feline Lower Urinary Tract Disease (FLUTD) is one of the most common conditions our cats are prone to. Blueberries, like cranberries, are thought to be good for urinary health. It’s suggested that they work in the same way – by preventing bacteria like E. coli attaching to the bladder wall.

How Many Blueberries Can A Cat Eat?

You can have too much of a good thing, and the fiber and sugar content of blueberries can lead to an upset stomach and diarrhea if large amounts are eaten.

When you first feed blueberries to your cat, you should only feed one- you can then see if your cat likes them, and monitor them for 48 hours for any adverse effects. You might find your cat prefers their blueberry sliced open or mashed.

If your cat decides they like blueberries, and they haven’t had any signs of gut upset, how many can they eat a day?

Well, that depends on your cat’s weight and any other treats they’re receiving. A 9lb cat having no other treats can consume a quarter of a cup of blueberries without going over their calorie allowance – but we wouldn’t recommend feeding that much as it would definitely cause digestive problems.

If your cat enjoys blueberries, it’s best to stick to no more than one or two blueberries a day to avoid gut upset from all that fiber and sugar whilst still maintaining a healthy diet. Blueberries can be used in place of cat treats as a low-calorie alternative.

Blueberries are a healthy fruit with few calories and lots of nutrients. They’re safe for cats as long as they are fed in small quantities, raw, and without other ingredients as an occasional treat. They contain important antioxidants, and are even included in many cat foods!