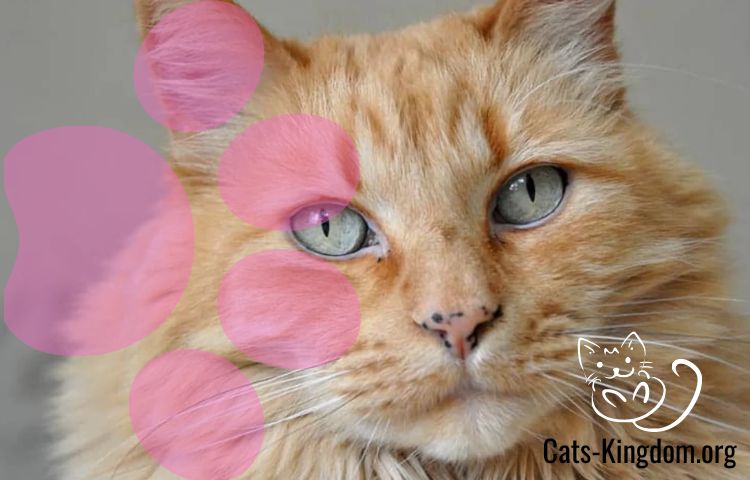 Does the nose of your cat have freckles? It’s my Newton. His freckle is actually in the vertical groove that runs down the middle of his nose, called the philtrum. He actually has that blemish that runs straight down the middle of his nose, which is why it appears to be always dirty. You should learn more about the condition if your cat has cat nose freckles. Let’s recap

Your cat may have lentigo, a hereditary disorder that causes black, freckle-like markings. If your cat will let you touch the spots, you will notice that they are either flat or slightly elevated and are either black or brown in colour. The edges of the freckles are distinct. Each one ranges in size from 1 millimetre to 10 millimetre. They are surrounded by normal-colored skin.

Lentigo simplex is the term for the ailment if your cat just has a few freckles. Lentignosis profuse is the medical term for a condition when a person’s freckles cluster together to the point that they form larger patches of prominent freckles (multiple lentigines syndrome). It’s far simpler to simply refer to it as lentigo, or even just freckles.

The freckles are the result of the pigment-producing cells called melanocytes having more melanin than the surrounding skin. No one knows why some cats have the genetic predisposition for lentigo while other cats the same color don’t.

2. Cat is most likely a redhead if she has freckles on her nose

Because lentigo is a genetic condition, it appears to be linked to the genes that make cats have red or orange colors. Freckles can be found on orange, calico, tortoiseshell or flame point cats, possibly because these varieties all have the orange coloration. Cream and silver colored cats also occasionally have lentigo, though it’s less common in those colors. Popular Read:  Why Does My Cat Scratch The Sides Of The Litter Box? – Simple Explanation

Popular Read:  Why Does My Cat Scratch The Sides Of The Litter Box? - Simple Explanation

3. The cat probably has other freckles

Lentigines (the fancy word for multiple lentigo freckles) usually don’t start on your cat’s nose, but rather on his lips and gums. If you don’t have to give your cat pills or don’t brush his teeth, you might not notice them when the melanocytes started to produce additional pigment on his lips, even though it often starts as early as one year of age.

As your cat ages, the freckles become more widespread, often getting more numerous and larger on his lips and gums. You might even see freckles on the roof of your cat’s mouth. Freckles also spread to other parts of the body, including the nose, where you are most likely to notice them because they’re literally front and center.

As they spread, lentigo freckles might also appear around the edges of your cat’s eyes or on his eyelids. Sometimes you will find them inside his ears and even on the pads of his feet

Newton, now seven years old, has only a handful of very small freckles on his lips in addition to the one on his philtrum. At his age, he probably won’t develop a lot more.

4.Cat nose freckles do not increase in size after sun exposure

Redheaded humans quickly learn that their freckles will grow and spread when they spend time in the sun. Lentigo doesn’t work that way, and the freckles don’t appear or grow because of your cat’s exposure to the sunshine. That’s a good thing, because how would you explain to your sunbeam-loving cat that sunbathing is going to give him freckles?Popular Read:  Why Does My Cat Scratch The Sides Of The Litter Box? – Simple Explanation

This doesn’t mean you should hand your cat a beach towel and some coconut oil and tell him to go lounge poolside. While sun exposure doesn’t make lentigo any worse, cats can suffer from sunburn. If your cat has freckles on his ears, don’t let him get sunburned ears that can lead to melanoma, because the freckles might prevent your spotting the melanoma lesion immediately.

You might wonder whether those spots itch, but unless your cat spends time looking in the mirror admiring himself, he will never know they’re there. As any redheaded human can tell you, freckles don’t itch or hurt. Lentigo is just a cosmetic condition, and it doesn’t require any treatment from your vet.

Lentigo freckles don’t later become melanoma, so you don’t have to worry about it being an early warning sign of anything. If you’re ever concerned about a spot on your cat, especially if it changes in size or becomes raised or tender, see your vet to be safe. To differentiate between lentigo and other conditions such as melanoma, the vet takes a biopsy with a small needle and then sends the sample to a laboratory for analysis.

Tags:Cat Behavior
previousCan Cats Eat Carrots? – Here Are The Detailed Information
nextHow to Care for an 8 to 12 Week Old Kitten? – Explained In Detail