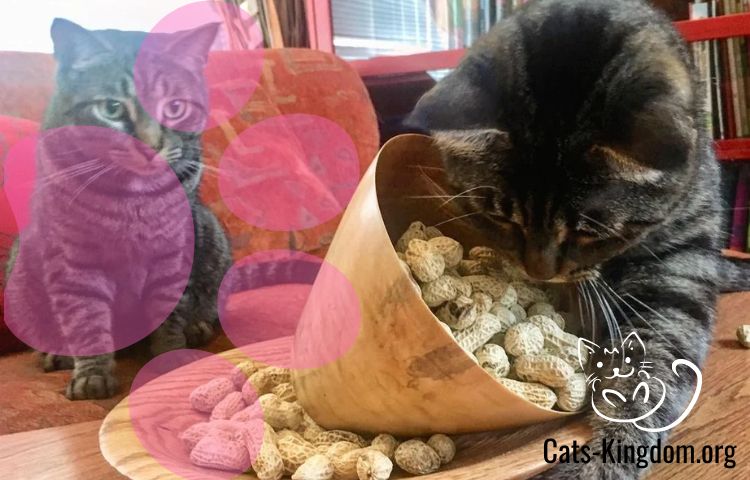 The peanut is by far the most widely consumed shelled food item in America. More than two-thirds of all nut consumption, according to the Peanut Institute, a real organization. The majority of people simply use the word “nut” for convenience, so don’t be too picky or consult your favorite plant reference book. In reality, peanuts are legumes rather than actual nuts.

One distinction is that the majority of widely consumed nuts, such as almonds, pecans, pistachios, and others, are grown on and picked from trees. Legumes typically grow just above the ground or, like the peanut, barely below it. Regardless of the exact name, peanuts are very nutritious and valuable nuts. Every year on September 13 in the United States, National Peanut Day is observed to recognize this wonderful seed.

It’s a fair question to ask. However you celebrate National Peanut Day, it’s perfectly reasonable to want to include your feline friends in the fun. After all, we see plenty of liver-, chicken-, and lamb-flavored cat comestibles, but I have to admit, peanuts aren’t the first thing I associate with cats.

Since peanuts aren’t widely heralded on the cat food or cat treat scene, taking the time to figure out their potential impact on cats shows good sense. Cat food and treats tend to be high in protein, which is an essential component in a cat’s diet. For all the time they spend sleeping, during their waking hours, cats rely on protein for energy. Peanuts contain the highest amount of protein by weight in all of the nut kingdom. So far, so good.Popular Read:  Why Does My Cat Scratch The Sides Of The Litter Box? – Simple Explanation

However, peanuts have a correspondingly high amount of fat in them. Despite the fact that peanuts contain a healthy kind of fat, to wit, monounsaturated fat, the cat digestive system is not built to break down or process large quantities of fat. While they also eat grass occasionally, cats are not adept at digesting plant matter either. These are both strikes against cats and peanut consumption, even though no part of the peanut is poisonous to cats.

Should you elect to give your cat a peanut on National Peanut Day, I would make the following serving suggestions. 1) Small portions: Since peanuts are an unusual food for cats, try one or two to start, preferably diced or chopped for ease of chewing. 2) Raw: Along with fats and plants, cats are not equipped to deal with salt or other additives, including sugar, and should absolutely avoid peanuts bathed in chocolate. 3) Unshelled: The tough outer husk is particularly dangerous to a cat’s digestive tract, and a stray bit of a peanut shell fragment may do even greater harm on the way out.

We take great amusement and entertainment from videos and photos of dogs eating peanut butter. Interestingly, while researching the question of whether cats can have peanuts, I found very little equivalent footage or pictures of cats eating peanut butter. On the whole, cat owners understand that cats develop fairly regular eating habits, and tend not to be as daring with their palates as dogs.

Unless you physically offer something like peanut butter to a cat, she probably won’t explore the taste sensation on her own. As with peanuts, if you must make the attempt, offer your cat peanut butter that is sodium-free and with as little sugar content as possible. Popular Read:  Why Does My Cat Scratch The Sides Of The Litter Box? – Simple Explanation

Are cats allergic to peanuts?

The chance of your cat developing a peanut allergy is unavoidable, as with any food, hence peanuts should only ever be given as a rare treat to cats. If your cat eats peanuts for the first time and vomits or has diarrhea, it’s probably because she can’t process them properly. Any true food allergy takes time to develop and requires frequent exposure. If your cat eats peanuts and subsequently displays the typical side effects, such as swelling, itching, or sneezing, you may have found that your cat has a peanut allergy.

Can cats eat peanuts? Technically, yes. Can cats eat peanut butter? Again, yes, in theory. What about an alternative approach? We notice that, when shaken, a dry, raw, unsalted peanut makes a pleasing rattle. With proper supervision, so that your cat doesn’t gnaw on or ingest the potentially harmful shell, peanuts might make interesting all-natural cat toys. Cats amuse themselves with all manner of unlikely things in the house, from electrical cords to your visiting friend’s pant leg, so why not peanuts?

Peanuts as toys may enchant your cat. Provided you are able to maintain line of sight with the peanut while your cat is hard at work, batting and chasing it around the living room, the rigid shell and rattling sound of the seeds skipping across the floor and rebounding off walls could keep you and your cat entertained for hours on end. That’s probably the most salutary applications of peanuts with regard to cats.Popular Read:  Why Does My Cat Scratch The Sides Of The Litter Box? – Simple Explanation

Do you feed peanuts to your cat?

These are all broad guidelines, and conclusions based on research. My own cat has never expressed an interest in peanuts, and, to be honest, I’ve never asked her opinion on these legumes.

What about your cats? Do your cats enjoy the occasional peanut? Have you seen any interesting videos online of cats attempting to eat peanut butter? Is your cat allergic to peanuts? Share your experiences in the comments!

Tags:Cat Care
previous5 Cat Breeds with No Hair
nextCan You Shave a Cat? – Answered In Detail