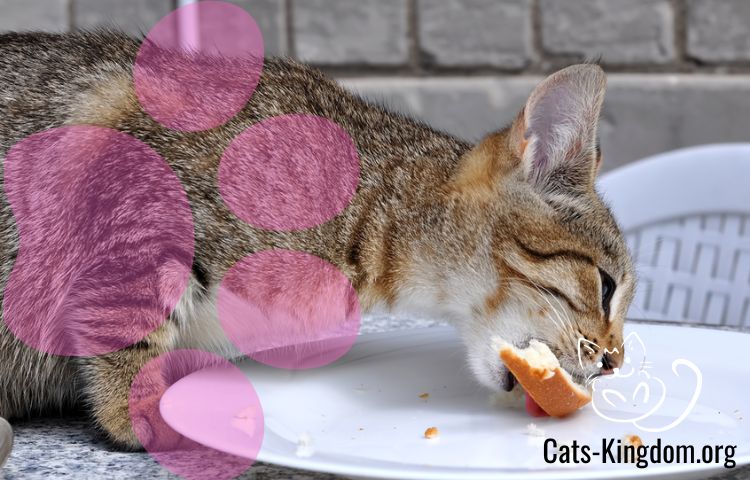 I never imagined that I would find myself asking the question “Can cats eat bread?” while simultaneously shrieking at my sneaky cat, “Don’t eat it! My cat was caught trying to sneak a piece of gluten-free bread during a recent session of product testing in my test kitchen. Jumping to the counter, he began licking each piece of bread that had been prepared for human eating (well, at least it was intended for human consumption).

I initially assumed it was the butter spread on the bread, but he was grabbing slices of white bread. He would attempt to draw a slice of bread back to the ground by its crust. He has only ever successfully stolen chicken nuggets off the counter, so I was surprised by the behavior. Do cats enjoy bread, then? Have they been keeping this a secret from us? Even so, can cats eat bread?

Can cats eat bread and other products with breading?

When it comes to wondering “Can cats eat bread?” I’m not alone. My friends chimed in and told me about their carb-loving cats. One told me about his cat that loved stealing pizza crusts to get to the doughy insides. Another one was in love with a particular brand of pancake mix — both cooked and uncooked dough. My friends didn’t understand if it was the toppings on the bread (like butter, cheese or pepperoni) or the bread itself. They, too, were wondering, “Can cats eat bread?” and if cats eating bread was something that was safe.

Is It Dangerous to Cats?

So, is bread safe for cats? Thankfully, bread isn’t that much of a danger for cats. So, the answer to “Can cats eat bread?” is technically “yes”— but it’s not really recommended. Cats don’t have a need for bread in their diets.

Dr. Heather Loenser, Senior Veterinary Officer of the American Animal Hospital Association, warns of the dangers of eating raw or rising bread dough. “The biggest danger to cats would be eating raw dough because the fermentation from the yeast in the dough can cause the dough to expand in the cat’s stomach,” she cautions. “This can cause severe abdominal pain, and theoretically, cause the stomach to perforate.”

Dr. Loenser adds, “since alcohol is a byproduct of fermentation, alcohol poisoning is possible. Signs would include vomiting, diarrhea, lethargy, difficulty walking or looking drunk. Fortunately, few cats seem to be drawn to eating raw bread dough — it’s much more of an issue with dogs.”

Can They Eat Bread With Certain Toppings ?

When wondering, “Can cats eat bread?” we also run into some trouble because of what’s on or in the bread. We’ve asked before if cats can eat cheese, a common topping on bread. Can cats eat cheese? Yes, but only sparingly because cats are lactose intolerant after kittenhood.

But can cats eat bread with toppings that aren’t dairy? “Other potential ingredients in bread that could be problematic include garlic and onions, which can cause red blood cell damage and anemia,” says Dr. Loenser. Even in small quantities, garlic can cause stomach upset, vomiting and diarrhea in cats. Seek veterinary attention if you believe that your cat has consumed garlic.

Dr. Loenser says that after 15 years of practice, she’s never seen a case of illness in a cat due to bread or dough ingestion, so it’s not necessarily a common danger. So, skip the garlic bread and keep the onion spreads away from any bread that might be in kitty’s path.