What Does a Cat’s Arched Back Mean? – Explained Below 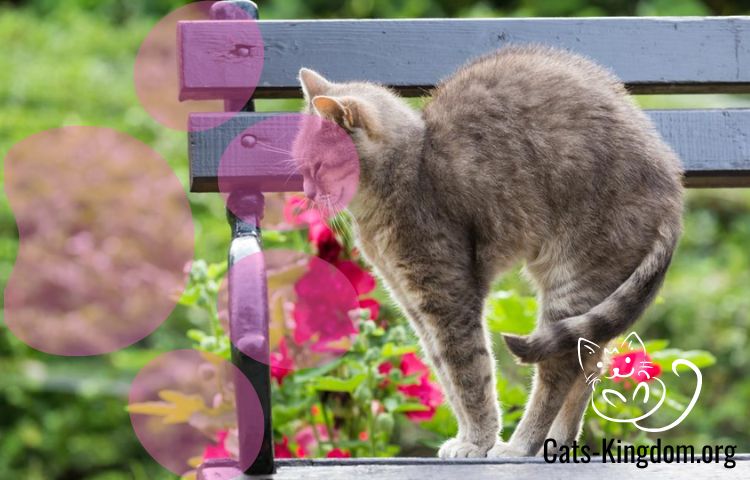 The arched back of a cat is among the most recognizable images of felines. Cat silhouettes with arched backs and hair on end are common, especially around Halloween, and they add to the spooky aura of the occasion. But when you observe a cat’s arched back, what is actually happening? Let’s explore the logic and science underlying this timeless position.

Why do cats’ backs arch?

There are a few common scenarios where you might come across a cat’s arched back. First up, it can be part of the stretching process that takes place after waking up from a slumber session. In this case, the cat’s vertebrae — which usually total around 50, including the tail — allows her to strike such a distinctive arched pose. Stretching also taps into a cat’s hunting instincts: Keeping the muscles and joints supple can be key to securing that all-important meal when living out in the wild.

“If a cat wakes up from a nap, he may do a good stretch by arching his back briefly to unlink muscles,” says Pam Johnson-Bennett, a certified cat behavior consultant. “There will be no piloerection of fur, and everything else about the cat’s demeanor will be relaxed.” (Piloerection is the involuntary bristling of hairs that’s controlled by the nervous system.)

Some cats are also fond of striking an arched back pose during playtime — and it’s a move often followed with a bunch of frantic hopping and skipping around. This is especially prevalent during the kitten stage of development. If you look closely, you’ll see that the cat’s hairs are not usually puffed up, which signifies playful behavior.

Beyond stretching and playing, the main likelihood of seeing a cat’s arched back is when the feline feels the need to become defensive. “Arching is a posture displayed when a cat is fearful and is worried about a threat,” Pam explains. “The posture is intended to make the cat look bigger.”

The body language behind a cat’s arched back

The body language going on when a cat arches his back builds on the idea of the pose being part of a feline’s defensive repertoire. “When a cat arches his back, the cat is trying to be bigger and more imposing,” says Pam, whose own resident feline is a 10-year-old rescue named Pearl. “In addition to the arch, there is also piloerection of hair.”

The goal of a cat’s arched back is a straightforward one, inspired by a feline’s innate self-preservation instincts. “It’s all intended to convince an opponent to think twice about advancing,” Pam explains. “Cats don’t like confrontation, so they use body language to try to prevent fights.” In one sense, a cat’s arched back symbolizes a call for peace.

What to do if a cat’s back is arched

If you find yourself in the vicinity of a cat arching his back, whether in the midst of Halloween or elsewhere during the year, there’s a pretty simple best code of practice to follow: Move away.

“This is a distance-increasing behavior, so the cat is strongly requesting you to not pursue,” Pam says. “The wisest move is to leave the cat alone.”