What Are The Similarities Between Cats And Dogs? – Answered In Detail 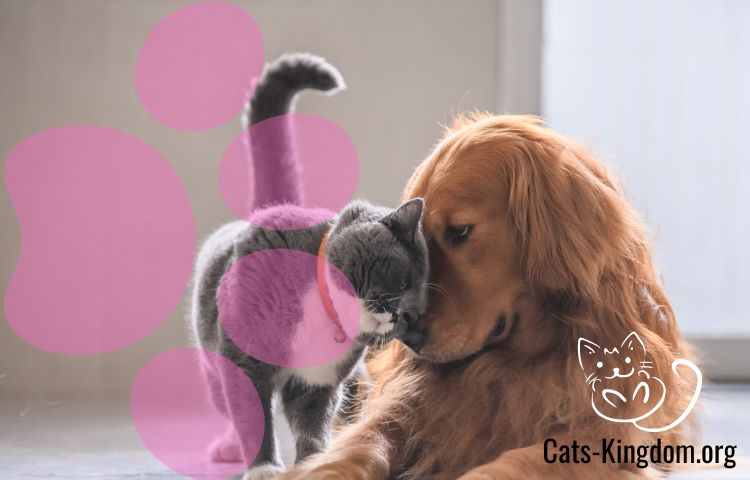 There’s a good possibility that if you have a cat, you also have a dog. Although many people adore these popular pets, it goes without saying that cats and dogs differ in a number of important ways.

It should not be surprising that the mindsets and actions of these two completely different animal species—dogs descended from wolves and cats from their big cat cousins—are completely at odds with one another.

Nevertheless, despite these obvious differences, cats and dogs have some unexpected things in common. Wondering what they are?

Discover six unexpected similarities between cats and dogs that you might not have known about by continuing to read!

One of the several similarities between cats and dogs is that they are always quick to seize an opportunity if it arises.

1. Cats and Dogs Are Both Opportunists

Oh, we know how this goes. If you’ve ever kept a cat or dog in your home, you know that eating alone is never an option. And, if you’re cooking in the kitchen, then you know your little four-legged friend will instantly become curious about what it is you’re making.

And, you know all too well the dangers of leaving food out if you have a dog or a cat. While your cat or dog might be on their best behavior when you are present, remember, that both cats and dogs are opportunists.

The difference is that your dog might feel guilty and flash those big puppy dog eyes. But your cat?

They will likely have no remorse for taking a bit out of your turkey sandwich when you got up to use the restroom.

If the opportunity presents itself, why not? That’s basically cat logic for you, but one of the several similarities between cats and dogs is that they are always quick to seize an opportunity if it arises.

Clicker training for cats is a way in which many cats are trained.

Despite the common misconception that cats cannot be trained, countless viral videos have proven otherwise. While most service animals will be dogs, cats can be trained to perform various impressive commands.

The difference is that cats can just be trickier to train as they are not as food motivated as dogs are to perform. Clicker training for cats is a way in which many cats are trained. When training cats, just remember you’ll need to practice patience.

With that being said, it’s very easy to train cats to come when called, not jump on surfaces where they shouldn’t be, and also “sit” and “wait.” Want to teach your cat the word “no” with ease? Check out this resource here on All About Cats.

We know that dogs demand affection, and there are even some cats who do as well.

3. Both Are Social Beings

For centuries, cats have been wrongfully described as antisocial solitary beings. But that is honestly the furthest thing from the truth.

Cats can easily become depressed if left alone for too long. And although they come across as aloof sometimes, your cat craves attention, affection, and bonding with people and pets in their homes.

We know that dogs demand affection, and there are even some cats who do as well. Cats need attention and should not be expected to spend long days alone without interaction with other pets or people in their homes.

In the wild, feral cats live in colonies. You do not see cats isolating themselves from other beings because cats are social creatures. (Big cats, like the snow leopard, will do this, but not domesticated cats.)

With that being said, cats and dogs both love bonding with their people. This is why they both become your little shadow in your home.

They want to know what you’re doing at all times once you’re their chosen person, so forget about going to the bathroom alone ever again. Or eating, for that matter!

Cats and dogs do not possess the ability to speak to us in our language, so they rely on body language to communicate with us.

4. Both Use Body Language to Communicate With Humans

Cats and dogs do not possess the ability to speak to us in our language, so they rely on body language to communicate with us.

Obviously, there will be differences, like a dog’s tail wagging is typically a good thing, but a cat’s tail wagging signals they are seriously annoyed.

But regardless of the many moves they’re making with their bodies, one of the many similarities between cats and dogs is that they rely heavily on body language to communicate with humans as well as other animals.

From their eyes to those cute ears and especially those fluffy tails, cats and dogs both utilize their bodies to express how they are feeling. It’s our job to know and understand what they are saying to us so we can strengthen our bonds with them.

When it comes to cats and dogs, both are very territorial species.

Both male and female dogs will do this when they are out on walks with their humans, and it’s their way of saying, “Hey, this is my turf” to other dogs in the neighborhood.

Cats will spray on poles, cars, bushes, and, unfortunately, furniture as a way of telling even other cats in their home that they’re the top cat.

Cats become far more threatened easily than a dog would and can be naturally wary of other cats they do not know, whereas a dog might be more inviting to another dog should they cross paths.

Nevertheless, dogs and cats are truly individuals by nature, and this varies greatly depending on the circumstances.

One of the similarities between cats and dogs is that they both possess strong survival skills and can hunt and scavage for food should they become lost in the wild.

6. Both Can Hunt for Food

Of course, your pampered pet knows exactly where their next meal is coming from. But what if your indoor cat gets lost outside? Then what? Well, while you’re panicking, just know that cats are excellent hunters and can do what they need to do in order to fend for themselves—and that means they’ll make their next meal happen.

While most dogs aren’t skilled hunters, they are, however, excellent scavengers. After all, have you seen just how fast a dog will scoop up those crumbs on the kitchen floor?!

With that being said, one of the similarities between cats and dogs is that they both possess strong survival skills and can hunt and scavage for food should they become lost in the wild.

Tags:Cat and Dog
previousHow Long Do Cats Live?- Answered In Detail
nextWhy Do Cats Run Away From Home? – Explained In Detail