8 Things About the Cat’s Stomach – Explained In Detail 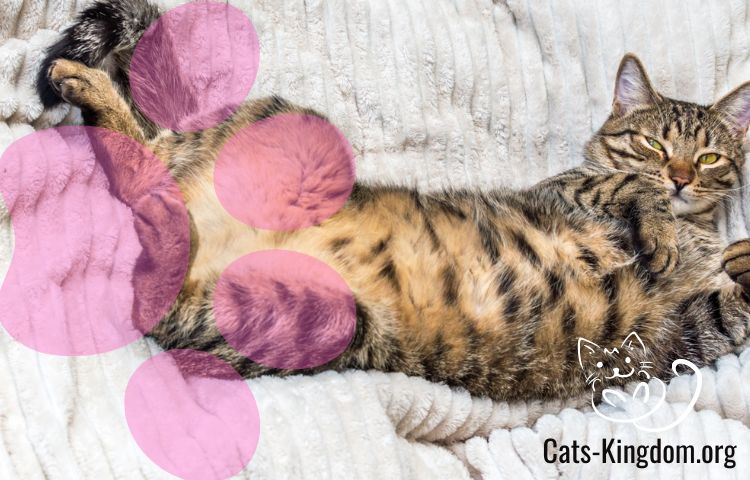 Most cat owners have more than a passing interest in their cat’s stomach, given that’s where those alarming hairballs originate from. Here’s what you need to know.

1. Where it all begins

The esophagus propels food that your cat swallows into the stomach, where the digestion process begins.

The principal job of the stomach is to store, mix, and digest food, and to regulate the emptying of its contents into the small intestine, where digestion continues. The stomach contains glands that produce acid and enzymes that digest the incoming food. The acid also helps to kill bacteria that enter the stomach. The stomach also is lined by glands that secrete mucus, which helps protect the stomach from being digested by its own acid and enzymes. Popular Read:  Why Does My Cat Scratch The Sides Of The Litter Box? – Simple Explanation

The most common sign that something might be amiss with your cat’s stomach is vomiting. Every cat vomits now and then, and most of the time there’s a harmless explanation for it, such as eating too fast, a sudden change in diet, or hairballs.Yawning cat by Shutterstock

When cats groom themselves, the barbs on their tongues remove the loose and dead hair. These hairs are swallowed. Most of the hair passes through the digestive tract, but some hair might accumulate in the stomach, where it can form into a hairball. Ultimately, cats will rid themselves of hairballs by vomiting them up. Longhaired cats like Persians and Maine Coons are predisposed to hairball problems.

Don’t instinctively blame all vomiting on harmless hairballs. Certainly if you see a big hairball in the vomited material, and this occurs infrequently, then hairballs is the likely diagnosis. but cats who vomit hairballs very frequently usually have an underlying disorder, and a veterinarian should investigate this.

Inflammatory bowel disease (IBD) is a disorder in which the immune system sends inflammatory cells into various segments of the gastrointestinal tract. The stomach commonly is affected.

In fact, my own cat, Mittens, has IBD of the stomach. Other signs such as decreased appetite and weight loss might accompany the vomiting.

Most affected cats tend to be middle-aged or older, although any-age cat can be affected. To make a definite diagnosis, biopsy specimens from the stomach are required. These can be obtained via surgery or by endoscopy.Cat’s digestive system by Shutterstock

Endoscopy is a procedure where a long, snake-like tube with a camera on the end is inserted down the esophagus and into the stomach, and biopsy samples are obtained. This is how my cat was diagnosed. Treatment with anti-inflammatory medications often brings the vomiting under control. Popular Read:  Why Does My Cat Scratch The Sides Of The Litter Box? – Simple Explanation

Cancer of the stomach can occur in cats. Although it can strike cats of any age, it mostly is seen in older cats. Lymphoma is the most common stomach cancer, but other types such as gastric carcinoma and mast cell tumors can occur.Cats of any age can suffer from IBD. Gray cat on couch by Shutterstock

If the tumor involves a discrete area of the stomach, surgery to remove the cancerous part of the stomach might be feasible. Lymphoma is considered to be a systemic disease, and chemotherapy is the treatment of choice. I treated a cat named Beowulf with chemotherapy for high-grade stomach lymphoma. He remained in remission after a year of treatment, so we stopped the chemotherapy. Three years later, he appears to be cured of his cancer.

Some of the medications we use to treat stomach disorders in cats are similar to the ones we use to treat people. If excessive stomach acid is believed to be contributing to a cat’s symptoms, we prescribe drugs like cimetidine (Tagamet), ranitidine (Zantac), and famotidine (Pepcid). Cats needing a stronger antacid can be given omeprazole (Prilosec).